An NIJ-funded evaluation finds that a revised curriculum and greater attention to teacher training have resulted in an improved program for preventing gang membership and delinquency.
Download and print 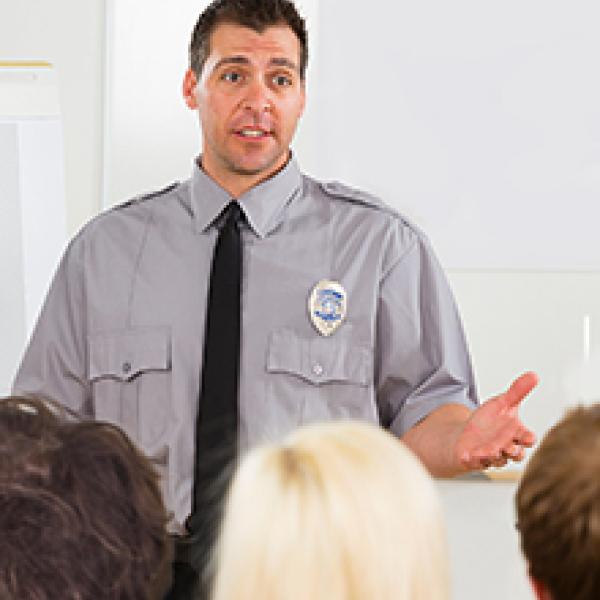 The Gang Resistance Education and Training (G.R.E.A.T.) program is teaching kids to avoid gang membership and helping them develop positive relationships with law enforcement, according to a recent national evaluation.

The program is designed to give at-risk youth the skills they need to resist pressure from gangs and avoid joining them. Results from a national evaluation conducted from 1995 to 2001 found that the program reduced several risk factors associated with gang membership and delinquency, but the evaluation found no differences between G.R.E.A.T. and non-G.R.E.A.T. youth in either gang membership or involvement in delinquent behavior.

Based on these findings, the curriculum was rewritten to emphasize classroom participation and skill-building exercises to address known risk factors for gang involvement. The new curriculum was piloted in 2001, with full-scale implementation in 2003. Results from the latest national evaluation show that the program was implemented as intended and that schools received it well. The evaluation also found that the new curriculum resulted in several improved outcomes.

G.R.E.A.T. is a gang and delinquency prevention program taught by law enforcement officers to middle school students across the United States and in several foreign countries. The program aims to help youth:

Created in 1991 by Phoenix-area law enforcement agencies, the program quickly spread throughout the United States.

In 2006, NIJ awarded funding to the University of Missouri–St. Louis to conduct a national evaluation of the revised G.R.E.A.T. program. The evaluators surveyed students attending 31 public middle schools in seven cities across the country. In each participating school, classrooms were randomly assigned to be taught or not taught the G.R.E.A.T. curriculum. Based on student responses, the evaluators examined how G.R.E.A.T. students differed from non-G.R.E.A.T. students in terms of delinquent activity and gang involvement. The evaluators also looked at how well the instructors taught the program.

One key to the success of G.R.E.A.T. is qualified, well-trained instructors teaching the program faithfully to its goals. In school districts that have school resource officers (SROs), the SROs generally teach the G.R.E.A.T. program. In school districts that do not have SROs, law enforcement officers teach the program as part of community relations or on an overtime basis.

See "How Teachers Were Evaluated."

In addition to observing G.R.E.A.T. instructors in the classroom, evaluators observed eight G.R.E.A.T. officer trainings over two years, including six 40-hour sessions and two 80-hour sessions. The evaluation concluded that the training provided officers with enough knowledge and skills to teach the program effectively.

The evaluators also surveyed G.R.E.A.T.-trained officers at each study site and interviewed officers teaching the program in 25 of the 31 target schools and their supervisors. Approximately two-thirds of the officers who received surveys responded. Responses indicated that officers believed that G.R.E.A.T. can build partnerships among law enforcement officers, youth, schools and the community and that the lessons meet the program goals and convey the right amount of information. They named the lessons on goal-setting and decision-making among their favorites and the most effective.

Evaluators also surveyed classroom teachers and conducted periodic reviews with school districts to assess how they viewed the program and how it fit into other academic lessons. The school personnel who were surveyed generally supported school-based prevention programs. About four-fifths of survey respondents agreed that these kinds of programs could deter youth from drug use, delinquent behavior and gang involvement and that schools have a responsibility to prevent students from engaging in these behaviors. However, fewer personnel reported that they would like to see more prevention programs in their schools (64 percent), and only 56 percent agreed that classroom teachers should incorporate prevention program lessons into their own teaching curriculum.

The evaluation revealed that G.R.E.A.T. instructors face several challenges, such as needing to shorten or skip lessons because of other school activities. Both the observations of program delivery and the school personnel surveys revealed that some G.R.E.A.T. officers had difficulties with classroom management and showing up to teach when scheduled. The evaluators noted that more attention to these issues in officer training, more participation of classroom teachers in G.R.E.A.T. lessons, and better communication between G.R.E.A.T. officers and teachers might address these deficiencies.

Most classroom teachers did not incorporate G.R.E.A.T. into standard lesson plans or use the associated teacher activities. Reasons given included lack of time, lack of relevance to other lessons, and teachers not knowing that additional G.R.E.A.T. activities were available. Incorporating G.R.E.A.T. in relevant subjects (e.g., health, social studies, language arts) might reinforce both G.R.E.A.T. lessons and standard class material. Improving officer-teacher communication also might help integrate G.R.E.A.T. into schools' curricula.

The Gang Resistance and Education Training (G.R.E.A.T.) program is rated as "promising." Past evaluations show that students who completed the G.R.E.A.T. program were 39 percent less likely to join a gang at the one-year follow-up than students who did not receive the program. G.R.E.A.T. students also reported a more positive opinion of law enforcement officers (statistically significant) and were better able to resist peer pressure, were less self-centered, and expressed less positive attitudes toward gangs than their peers did after one year.

To assess program effectiveness, the evaluators compared survey responses from students in the G.R.E.A.T. classes to control students on 33 potential outcomes, including behavioral outcomes (e.g., gang affiliation, frequency and variety of general delinquency, involvement in illegal activity), and 28 attitudinal measures, including two measures of attitudes toward law enforcement and toward gangs. The questions also assessed key risk and protective factors associated with problem behaviors among youth.

The evaluators administered a pre-test and a one-year follow-up questionnaire to gauge short-term program effects as well as three additional annual surveys to gauge longer-term effects of the program. The evaluators found that statistically significant differences existed between students in the G.R.E.A.T. classes and control students on 14 of 33 outcomes one year after the students completed the G.R.E.A.T. lessons and that smaller but still significant effects on these outcomes continued to exist after four years.

In addition, several skills-building objectives appear to have been met, especially refusal skills. However, no statistically significant differences existed between the two groups of students on self-reported delinquency. These effects were all beneficial but modest. Although the other comparisons between the two groups were not statistically significant, all comparisons indicated more prosocial attitudes and behaviors among the G.R.E.A.T. students. The findings suggest that most of the G.R.E.A.T. program's benefits to high-risk students appear early on and fade over time.

Results of the school personnel survey were less promising: Only about half of the respondents agreed that the G.R.E.A.T. program significantly reduced youth's gang participation in their schools and communities. This finding, however, is not inconsistent with the results of the student surveys. In the study schools, only half of the classes in one grade received the G.R.E.A.T. program. Evaluators noted that in schools in which almost all students, over time, receive G.R.E.A.T. training, one may expect to see less gang involvement.

The Impact of Evaluation

During the first national evaluation, many stakeholders collaborated to look critically at the G.R.E.A.T. program's curriculum and how effectively officers were teaching the information. Their work led them to create, adopt and teach an improved curriculum that engaged students and enabled more of them to avoid gang membership, violence and criminal activity and helped them develop positive relationships with law enforcement officers.

The latest evaluation suggests that expanding the program to more classrooms, working more closely with classroom teachers and informing them about available G.R.E.A.T.-related activities, and integrating the G.R.E.A.T. curriculum into regular classroom lessons would allow G.R.E.A.T. to make an even greater contribution to preventing gang involvement and delinquency.

The two national evaluations and reactions to G.R.E.A.T. from school administrators, teachers, principals, students and law enforcement officers show a program that has learned from being evaluated. The revisions to the curriculum and greater attention to teacher training appear to have resulted in modest improvements to the G.R.E.A.T. program.

Sidebar: How Teachers Were Evaluated

All instructors — be they school resource officers or law enforcement officers — must complete G.R.E.A.T. officer training and be certified before being assigned to teach the program. This training (one week for officers with teaching experience and two weeks for others) introduces officers to the program and covers gang trends, emphasizing prevention over enforcement; the developmental stages of middle school students; and teaching and classroom management techniques.

The Bureau of Justice Assistance, the agency responsible for operational control of G.R.E.A.T., trained a group of senior G.R.E.A.T. officers to observe classroom teaching. Evaluators observed 33 officers teaching the G.R.E.A.T. program in the 31 participating schools from September 2006 through May 2007. Each evaluator documented whether the instructor addressed each lesson component, the time spent on each component, how well the instructor engaged the students, whether activities were conducted as intended, and the overall quality of the lesson.

This article was published as part of NIJ Journal No. 275, released May 2015.

Brian Higgins, a writer-editor with Lockheed Martin, recently passed away. He contributed significantly to a body of work produced through the National Criminal Justice Reference Service and available on NCJRS.gov.