Looking for the Link: The Impact of Foreclosures on Neighborhood Crime Rates 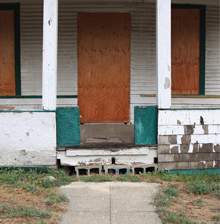 Over the past decade, millions of homes across the country have slipped into foreclosure. National media outlets have reported anecdotal evidence suggesting that foreclosed properties attract drug dealers, gang members, prostitutes, squatters and copper thieves. But research to support those claims has been lacking, and disagreement continues about whether foreclosures and bank-owned properties increase neighborhood crime.

Three recently completed studies, funded by NIJ, offer some clarity to the discussion. The bottom line: The three studies, which used different methods, seem to agree that foreclosures and bank-owned properties do not increase criminal activity, except in certain sections of specific U.S. cities.

The researchers concluded that any observed relationship between foreclosures and crime occurs only because both can be found in disadvantaged neighborhoods. In their final report, they noted that "there is no reason to conclude that concentrated foreclosures … led to significant increases in crime on their own."[2]

Not a National Trend

Studies that point to a possible link between foreclosures and crime rates do not necessarily indicate an emerging national trend. For example, Eric Baumer of Florida State University's College of Criminology and Criminal Justice and his colleagues looked at foreclosure data from RealtyTrac and robbery and burglary data from local police agencies. The data covered more than 60 cities across 29 states from 2007 to 2009. The NIJ-supported researchers identified a positive correlation of foreclosures with robbery or burglary — or both — in a handful of cities.

However, they found that the influence of neighborhood foreclosure rates on neighborhood crime was "highly contingent on the city under investigation."[3] Because the cities had no economic similarities, the researchers could not draw general conclusions. Ultimately, they surmised, the relationship between foreclosure and crime in one city does not necessarily reflect what is happening in the next town over or in a similar town across the country.

Other Factors at Play

Ingrid Gould Ellen of the New York University Furman Center for Real Estate and Urban Policy led a study that zoomed in further on the relationship between foreclosures and crime. The researchers mapped foreclosures and crime to "blockfaces"[4] in New York, Chicago, Miami, Atlanta and Philadelphia from 2004 to 2011. By examining micro-place units, they were able to show a small but statistically significant effect of multiple foreclosures on crime rates: Each additional bank-owned, foreclosed property corresponded to an additional 0.063 crimes overall.

However, the data also showed that factors other than foreclosures, such as the presence of empty homes, might have been at play. The researchers found that the impact of bank-owned properties — those that had already been foreclosed on and sold at auction — on local crime rates was less severe than that of properties that were on their way to auction. In fact, the researchers noted, it might actually be the side effects of entering the foreclosure process that lead to any increase in violent and public-order offenses. They found that the real culprits may be the reductions in maintenance and investment in a property that precede a foreclosure, stemming from the property falling into "ownership limbo" (meaning the homeowner is no longer invested in the property's future), and the presence of empty, unmonitored homes that can be used to conceal criminal activity.[5]

Researchers from both the Urban Institute and the New York University studies suggest that city leaders take steps to prevent crime in neighborhoods affected by high rates of foreclosures:

Using the evidence provided by these three studies, bankers, police, city planners, civic leaders and other community stakeholders can better understand the relationship between foreclosure (and its accompanying property effects) and crime, and they can explore how helping community members stay in their homes can affect the overall crime rate.

[note 4] Blockfaces are street segments bounded by their closest cross streets and include buildings on both sides of the street.

Farhana Qazi is a senior project manager at Lockheed Martin/CHIEF; she is also an author and internationally recognized public speaker. April L. Trotter is a writer/editor for the National Criminal Justice Reference Service. Joel Hunt is a senior computer scientist in NIJ's Office of Science and Technology.