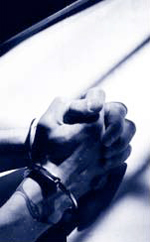 This was no ordinary telephone call. A Baltimore man allegedly used a cell phone to arrange a murder, offering to pay $2,500 for the crime, according to Maryland federal prosecutors. Moreover, the man should not have had a cell phone — he was in the Baltimore City Jail on the evening he allegedly placed the fateful call. Indeed, according to the federal indictment, he was being held on a murder charge and made the call to arrange the killing of a witness to the original murder.

Cell phones and the electric chargers that power them are just the latest form of contraband that correctional institutions grapple with daily. Corrections officers also face attempts to smuggle drugs and weapons into the facilities, as well as inmates who fashion weapons out of ordinary materials.

To help correctional managers detect contraband and run safer institutions, the National Institute of Justice (NIJ) is sponsoring several research projects and pilot programs, based on recommendations from expert practitioners, to test an array of technologies.[1] Scanning and detection devices can help spot everything, from a cell phone to a knife. Devices using radio waves can track prisoner and staff movements within an institution. New computer programs may help predict where problems are most likely to occur.

One NIJ-sponsored pilot program that enjoyed success used a millimeter wave imaging system to scan visitors at the Graterford State Correctional Institution in Pennsylvania. The imaging system can look through clothing to detect weapons, cell phones and nonmetallic objects. Currently used by the Transportation Security Administration (TSA) to scan passengers at an increasing number of airports, the system was tested and evaluated at Graterford, a maximum-security facility that houses about 3,100 inmates outside Philadelphia.

A person steps into a "portal," which looks like a booth. The system beams radio energy in the millimeter wave spectrum from antennas that rotate around the person. The energy is reflected, and scanners produce an image of the body and any objects hidden beneath the clothing. The system, called the SafeView, is manufactured by L-3 Communications. According to the manufacturer, the system produces less radiation than a cell phone transmission.

Millimeter wave systems have been controversial because they present images of bodies so well — similar to nude photographs — that some people consider the systems intrusive. TSA has taken various measures, such as immediately deleting the images, to win acceptance. This technology has much the same capabilities and limitations as an alternative approach — backscatter X-ray systems — used for the same purpose.

The pilot project at Graterford involved scanning visitors. Thomas Dohman, Graterford's intelligence captain, said the system was used for more than a year, and officials believe it was successful. "It's very effective at discouraging smuggling," he said.

To address privacy concerns, prison officials used a privacy screen that cut out the most explicit views but still allowed the system to signal if something was hidden beneath a person's clothing. Graterford officials also set up laptop computers when they introduced the system so visitors could see for themselves how the images looked. "The public accepted it," Dohman said.

The Graterford system completed between 400 and 600 scans in a typical week, and each scan was completed in seconds. "It really didn't slow down the [screening] process," Dohman said.

The manufacturer made the system available for free during the testing period, and NIJ coordinated the pilot project because it provided an opportunity to do an operational evaluation in a correctional environment that involved a commercially available system.

Overall, the millimeter wave system improved the contraband situation at Graterford, Dohman said. On several occasions, the system detected cell phones. Yet Dohman believes the system's greatest success is in its deterrent effect. According to Dohman, people who knew about the system did not even try to smuggle something through it. "It's infrequent that people had anything concealed," he said.

Although a millimeter wave portal can identify objects hidden under clothing, they are large, fixed and relatively expensive. Corrections officials have told NIJ that they would also like to be able to use inexpensive, handheld devices. These would give corrections officials more flexibility by allowing them to screen people at entrances and to perform spot checks anywhere. NIJ is sponsoring the development of a handheld device that can detect everything from cell phones to Plexiglas.

Many correctional institutions have reported that while their metal detection systems work well, the institutions face constant challenges in detecting nonmetallic objects, such as improvised weapons made of wood or hard plastics. NIJ awarded a grant to Luna Innovations, Inc., to develop a new device that would spot contraband items regardless of what materials are used.

The Weapons and Non-Permitted Devices Detector, or WANDD, is a handheld system similar to handheld metal detectors. The WANDD scans fully clothed people for contraband hidden under their clothing. Although designed specifically to spot nonmetallic contraband, it detects metal as well.

Unlike millimeter wave systems that use radio energy, the WANDD uses sound waves — akin to sonar — to detect objects. The WANDD includes an ultrasonic wave transmitter and an acoustic receiver. The device "listens" to the sound waves that bounce back to it, detecting hidden objects under clothing.

Engineers at Luna tested the prototype at the Virginia Peninsula Regional Jail in Williamsburg. They found that the device works well with various clothing fabrics, including standard jumpsuits. The WANDD prototype successfully detected objects such as cell phones, plastic knives, guns and credit cards.

Meanwhile, some companies are developing similar systems that operate like radar instead of sonar to accomplish the same objective.

Corrections officials are beginning to test new technologies that might help meet other challenges as well. One potentially promising approach involves radio frequency identification (RFID) technology, which uses small transponders called "tags" to track movements. RFID tags can be attached to or incorporated into a variety of objects, such as wristbands. Each tag has an integrated circuit and a tiny antenna to handle radio signals and can be used with a network of sensors — called RFID readers — to track movements. For example, a few correctional institutions have used the systems to provide information on prisoners' movements and to alert staff if there is an unusual concentration of people in a certain area. Movement information can be stored in computers and could prove useful in investigations to determine who was present in a certain part of a building at a particular time.

RFID technology is mature and has been used to track inventory in warehouses, but its use in correctional facilities is relatively new. Early commercial products incorporating RFID technology came on the market during the 1970s, but specialized systems geared to the corrections environment are 21st century phenomena. Jack Harne, a correctional technology program manager at NIJ, noted that one of the Institute's technical working groups — the expert panel that advises NIJ on corrections technology — is interested in developing a greater understanding of the capabilities and limitations of RFID technology.

To that end, NIJ is working with the RAND Corporation and the District of Columbia Department of Corrections to assess the effectiveness of an RFID system that will soon be up and running in D.C. jails. RAND researcher Laura Hickman said the challenge involves collecting information about D.C. jail operations to be able to measure any changes that occur. For example, the researchers need accurate measures of violent incidents during a typical month so they can see whether violence declines after the system is installed. The RAND study will determine how much an RFID system helps to detect potentially volatile situations and prevent violence.

The evaluation will help officials determine the effectiveness of the system and will offer an objective view of the strengths and weaknesses of RFID systems in correctional settings. Existing information about RFID in such settings comes from suppliers, who are not perceived as objective sources, Hickman said.

"Institutions don't have anyone to listen to except for vendors," she said, noting that the NIJ study will provide independent evidence about how effective an RFID system can be in a corrections environment.

In addition to evaluating the new system in D.C., the project also involves a survey of correctional institutions across the country to learn how many are using RFID technology and how well the technology is working.

In another effort to adapt existing technology to corrections, NIJ has teamed up with the Florida Department of Corrections (DOC) to test a computerized system that predicts potential trouble spots within prisons, allowing managers to assign extra staff or take other actions to prevent violence and other problems.

Linda McInnis, the Office of Information Technology project manager at the Florida DOC, said the effort involves using data warehousing and data mining techniques to pinpoint where trouble is most likely to occur. Dubbed COTAS (Correctional Operational Trend Analysis System), the system uses historical information and computerized number crunching to give supervisors a reading of the "climate" of a facility or parts of a facility, right down to individual cells. COTAS uses information about prisoners — such as age, gang membership, escape attempts, violent incidents, and medical and psychological conditions — to predict potential trouble spots.

The Florida DOC developed the computerized system, and NIJ provided funding to expand its use and to test it. COTAS is now available to administrators in Florida's 137 correctional facilities. These include 60 prisons and a variety of other operations such as work camps. Florida (which, as of June 2008, housed 95,000 inmates) is testing and refining COTAS, which will be independently evaluated in 2009. If COTAS is found to be effective, the Florida DOC will make copies of the software available in 2010 to correctional institutions outside of Florida.

Meanwhile, NIJ will continue to work with officials around the country in an effort to apply technological advances that will make prisons and jails safer for corrections officers and inmates alike.

[note 1] The technologies discussed in this article are still in development. NIJ has not yet completed rigorous evaluation of these tools.

Philip Bulman is a writer and editor at the National Institute of Justice. He has more than 25 years of experience as a journalist and writer specializing in science policy, scientific research and technology development.