According to the Centers for Disease Control and Prevention, there were an estimated 64,000 drug overdose deaths in 2016; where a drug was specified, 76 percent were identified as opioids.[1]

The following provides an overview of illegal opioid drug markets and the National Institute of Justice’s (NIJ’s) efforts to combat drug trafficking, markets, and use of illegal drugs, including licit drug diversion through research and capacity building for law enforcement, forensic laboratories, medical examiners and coroners, prosecutors, and other stakeholders.

Opioid Markets, Use, and Consequences

Although survey figures indicate a steady increase in heroin use over time (from 314,000 in 2003[5] to 948,000 in 2016), the estimated prevalence of heroin users is low nationwide (0.4 percent in 2016) compared to other drugs.[6] The driving force in opioid markets is prescription drug diversion and illicit synthetic drug production. Second only to marijuana in prevalence, misuse[7] of psychotherapeutic drugs (i.e., pain relievers, tranquilizers, stimulants, or sedatives) in the past year was reported by an estimated 1.3 million Americans (5.3 percent) in 2016. Of these, two-thirds reported misuse of opioid analgesic pain relievers (e.g., hydrocodone, oxycodone, buprenorphine, fentanyl, or methadone).[8] 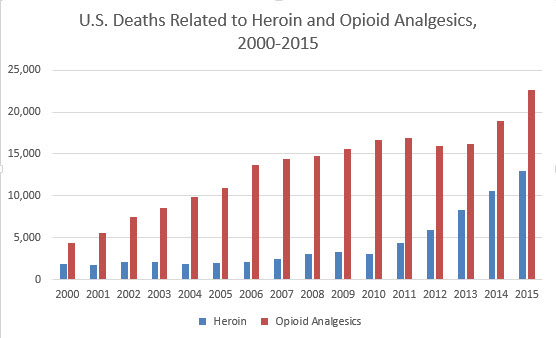 The overdose figures above include synthetic drugs, also known as novel psychoactive substances (NPS). In September 2016, the DEA issued a warning to the public and law enforcement about the risks of Carfentanil, a synthetic opioid that is many more times potent than heroin or other synthetic drugs like fentanyl or morphine.[10] In addition to these pharmaceuticals that are diverted for nonmedical use, growth in the opioid drug market is fueled by the influx of NPS that are chemically engineered compounds. NPS have a high capacity for rapid development of high-potency analogues, and can be manufactured in clandestine drug labs. Oftentimes, heroin is combined with NPS and other drugs, increasing risk to users who cannot easily identify the drugs. These highly potent drugs and the toxic nature of chemicals used to manufacture NPS make crime and overdose scenes dangerous to first responders who encounter these drugs.[11]

The fast pace of drug product development makes crime scene information collection and analysis difficult for narcotics, forensic science, and medicolegal death investigators. In the aggregate, it presents challenges to drug intelligence and community surveillance agencies to examine trends over regions and time. This delays identification of drug deterrent, interdiction, and organized crime target opportunities. Researchers participating in sentinel community networks report that heroin and other opioids are rapidly climbing in frequency across all drug indicators (drug-involved deaths, drug seizures, treatment admissions, etc.) and regardless of urbanicity or region (e.g., Philadelphia, Maine, and San Francisco).[12]

Drug seizures yield a variety of heroin and other opioids often found in combinations, including fentanyl, analogues (e.g., acetylfentanyl or furanylfentanyl), and other adulterants. 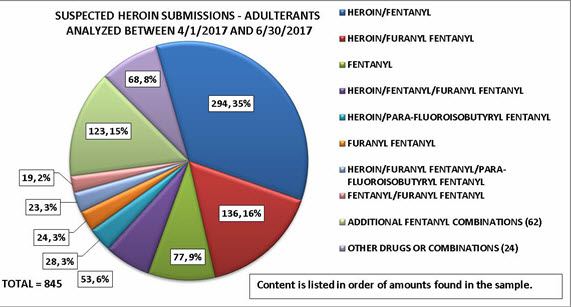 NIJ’s Drugs and Crime Research Portfolio furthers the U.S. Department of Justice’s crime prevention and law enforcement goals by supporting research on violent and other drug-related crime to combat the nation's opioid epidemic and by promoting cost-efficient law enforcement, court, and corrections responses to illegal drug markets (including diversion of prescription drugs) and criminal behavior related to drug use. NIJ remains committed to supporting rigorous basic and applied research on evidence-based tools, protocols, and policies for state, tribal, and local law enforcement and other criminal justice agencies. The current priority is to address drug trafficking, markets, and use that relate to heroin and other opioids such as fentanyl and related analogues.

Partnering with the National Highway Traffic Safety Administration and the National Institute of Drug Abuse, NIJ led a 2015 meeting on drug recognition and impairment research. The meeting allowed dissemination of information on then-current projects to active practitioners, an exchange of information with other agencies, and an opportunity to solicit feedback. This informs federal plans for future research that are responsive to the field’s information and practice needs. Discussion topics were detection of illegal drugs, including quantitation (purity) of drug seizures; forensic toxicology post-use; reliable measurement of drug impairment; investigative leads for case building; collection and submission of drug evidence for laboratory analysis; tools for drug detection in the field; expert witness/testimony; confirmation of toxicological and chemical analysis; and protocols for prosecution and court case management. This helped lay the foundation for NIJ’s solicitations for applied drugs and crime research. Read a summary of the meeting.

The NIJ Research and Evaluation on Drugs and Crime FY 2017 (pdf, 41 pages) solicitation requested proposals for research on evidence-based tools, protocols, and policies for state, tribal, and local law enforcement and other criminal justice agencies to better address drug trafficking, markets, and use related to heroin and other opioids, including NPS. (Watch a webinar for details.)

[note 7] Misuse is to use a drug in any way not directed by a doctor, including use without a prescription of one's own or use in greater amounts, more often, or longer than told to take a drug.