In its final report, an expert panel of medical professionals concludes that the use of conducted energy devices by police officers on healthy adults does not present a high risk of death or serious injury. 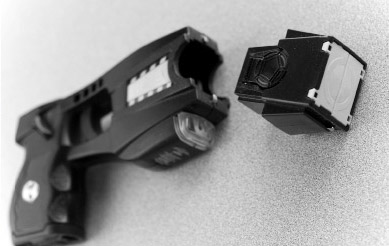 Today, more than 12,000 law enforcement agencies in the United States use conducted energy devices (CEDs) as an alternative to conventional physical control tactics or other means of subdual. An NIJ-sponsored expert panel, convened to evaluate the safety and effectiveness of CEDs, issued its final report in May 2011. The panel concluded that law enforcement officers need not refrain from using CEDs to place uncooperative and combative subjects in custody provided that the CEDs are used in accordance with accepted national guidelines and an appropriate use-of-force policy. In its report, the panel concluded that field use of CEDs is safe in the vast majority of cases and creates less risk of injury — to officers and suspects alike — than other options of subduing uncooperative persons.

In addition to investigating the effects of CEDs, the panel issued recommendations for their use. Among these were to apply CEDs for no longer than 15 seconds at a time and to limit the number of discharges to the fewest needed to control the suspect. The panel also said that, regardless of how long the CED exposure lasts, some form of medical screening and ongoing observation of individuals exposed to CEDs is crucial. Screening should start at the scene and individuals should continue to be monitored in custody for abnormal physical and behavioral changes.

CEDs, such as Tasers, generate 50,000 volts of electricity. The electricity stuns and temporarily incapacitates people by causing involuntary muscle contractions. This makes people easier to arrest or subdue. Widespread police adoption of CEDs has been driven by two major beliefs: that CEDs facilitate arrests when suspects actively resist and that they are safer than other use-of-force options. Independent researchers studying law enforcement agencies that deploy CEDs have concluded that, when used appropriately by properly trained officers, CEDs have reduced injuries to officers and suspects in use-of-force encounters and reduced use of deadly force.[1]

Nonetheless, a number of individuals have died after exposure to a CED. Some were healthy adults; many were chemically intoxicated or had some underlying medical condition. These deaths have caused law enforcement personnel and the public to ask questions about the safety of CEDs.

To answer these questions, NIJ, in cooperation with the College of American Pathologists, the Centers for Disease Control and Prevention, and the National Association of Medical Examiners, conducted a study to address whether CEDs can contribute to or be the primary cause of death and, if so, how.

To support the study, an expert medical panel was formed, composed of forensic pathologists, medical examiners and specialists in cardiology, emergency medicine, epidemiology and toxicology. The panel reviewed 300 subdual cases in which a CED was used and later the person died.

In the vast majority of these cases, the original medicolegal investigations concluded that CED exposure was not the cause of death. The panel conducted in-depth reviews of 22 of those 300 cases and reviewed approximately 175 peer-reviewed articles on the physiological effects of CEDs. The panel's report provides findings concerning death investigation, CED use, CED-related health effects and medical response to the use of CEDs. The panel determined that there is no conclusive medical evidence in the current body of research literature that indicates a high risk of serious injury or death to humans from the direct or indirect cardiovascular or metabolic effects of short-term CED exposure in healthy, non-stressed, non-intoxicated persons.

Field experience with CED use indicates that short-term exposure is safe in the vast majority of cases. According to the final report, the risk of death in a CED-related use-of-force incident in the general population is less than 0.25 percent (one in 400). The report notes that, based on the panel's review and confirmation of the findings of the original death investigations of 300 deaths following CED exposure, it is reasonable to conclude that CEDs do not cause or contribute to death in the large majority of cases.

The panel concluded that, in general, the stress of receiving a CED discharge is comparable to the stress from otherwise being physically restrained or subdued. Verbal altercation, physical struggle and physical restraint all generate stress that may heighten the risk of sudden death in individuals who have a pre-existing cardiac condition or certain other diseases.

Unlike the risk of secondary injury (e.g., injuries due to falling as a result of CED exposure, discussed below), the risk of death directly or primarily due to the electrical effects of CED application has not been conclusively demonstrated. The literature suggests a substantial safety margin with respect to the use of CEDs when they are used according to the manufacturer's instructions. The possibility that the effects of a CED can be directly lethal in some cases, however, cannot be excluded — though not conclusively demonstrated, plausible mechanisms of injury exist. There are anecdotal cases in which no other significant risk factor for death is known and the timing of death provides circumstantial evidence that the CED's application was the cause of death. As such, there remains at least a theoretical possibility that in rare cases, CED application could be directly or primarily responsible for death due to a confluence of unlikely circumstances.

The report states that the risk of significant injury from CEDs is also low (0.5–0.7 percent). Significant injuries associated with CED use documented in the studies reviewed by the panel included puncture wounds from CED darts (including wounds to the eye, throat and skull resulting in loss of vision, unconsciousness and seizures requiring medical care) and falls related to muscular incapacitation or intense muscle contraction.

The panel highlighted the possibility of secondary injuries resulting from the use of CEDs on tall structures or steep slopes, where individuals exposed to a CED could fall; near flammable materials (including gasoline, explosives, aerosols and propellants) that a spark from a CED could ignite; and in water, where submersion could lead to drowning. The use of CEDs also presents a risk of interfering with implantable cardiac devices, such as pacemakers, although no bad outcomes have been reported. Furthermore, the physiological effects of prolonged or repeated CED exposure are not fully understood.

The panel acknowledged that there may be circumstances in the field that require repeated or continuous exposure to a CED discharge. They emphasized that law enforcement personnel must be made aware that the associated risks are unknown and most deaths associated with CED use involved multiple or prolonged discharges. The report states that it is critical that law enforcement officers minimize or avoid multiple or prolonged activations of CEDs as a means of subduing an individual. The report also states that the safety margins of CED use in healthy adults may not apply to everyone. The effects of CED exposure on small children, those with diseased hearts, the elderly, pregnant women and other potentially at-risk individuals are not clearly understood, and more data are needed. Law enforcement personnel should minimize or avoid use of a CED on members of these populations.

In addition to recommendations governing the use of CEDs, the panel issued advice in the event a death occurs following the use of a CED. The panel recommended that all deaths following deployment of a CED should be subject to a complete medicolegal investigation. This investigation should include an autopsy by a forensic pathologist and a medically objective investigation independent of law enforcement. In addition to the conventional information collected in a death investigation, investigators should collect information specific to the CED-related death, such as the manner in which CED darts or prongs were applied and where they were applied.

Finally, the panel recommended that law enforcement personnel maintain an ongoing dialogue with medical examiners or coroners and emergency physicians to discuss effects of all use-of-force applications, including those involving CEDs, and evaluate procedures involving life preservation, injury prevention and evidence collection.

Brian Higgins is a writer and editor at Lockheed Martin Corporation, which has a communications support contract with the Office of Justice Programs.