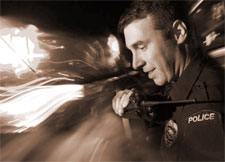 To officers in the Danville (Va.) Police Department, sometimes it seemed like suspects knew a little too much geography.

When being pursued, suspects would head straight for the state line, and in just a few minutes, speed into North Carolina. Because of incompatible radio systems, Danville officers unfortunately had no way to communicate directly with their colleagues across the border, complicating efforts to arrest the suspects.

To fix the problem and help improve public safety, the City of Danville teamed up with surrounding law enforcement agencies — the Caswell County Sheriff's Office in North Carolina, the North Carolina State Highway Patrol, the Pittsylvania County Sheriff's Office in Virginia and the Virginia State Police — to use Internet technology to bridge the gaps in their communications systems.

Each of the five jurisdictions participating in what became known as the "Piedmont Regional Voice over IP Pilot Project" was able to keep existing radio systems, avoiding costly replacements. The new communications link was provided by "Voice over Internet Protocol" (VoIP) systems, which convert voice signals into digital form, allowing them to travel over the Internet or private networks that use Internet technology before they are converted back to ordinary voice signals at the receiving end.

The National Institute of Justice (NIJ) provided technology support to the public safety agencies, and two vendors[1] donated equipment and services. Field tests show great improvement over previous conditions for participating officials. As Danville Chief of Police Philip Broadfoot said, "The technology works well. It's clear. It's effective. It's easy to use."

Police departments in the United States started using radios in the 1930s. Historically, they did not coordinate radio purchases with surrounding jurisdictions. Indeed, some agencies went out of their way to ensure that they used different frequencies as a courtesy to nearby police departments. They did not want to create radio interference problems for neighboring public safety agencies. In recent decades, neighboring police departments have started moving toward increased cooperation in radio communications.

Budgets also play a role in radio operations. According to Broadfoot, a wide disparity exists in the equipment used. Police departments use everything from state-of-the-art equipment to off-the-shelf hardware bought from a local electronics store.

Like the other agencies participating in the pilot project, the Danville police already had solid voice radio systems on their side of the state line. Patrol officers were frustrated, however, by their inability to talk to another officer who, although across the state line, was only a short distance away.

Take, for instance, when a suspect crossed into North Carolina's Caswell County. Danville police officers could communicate with neither the Caswell County Sheriff's Office nor the North Carolina State Highway Patrol (NCSHP). "If we needed to talk with them, it had to be by telephone," Broadfoot explained.

A Danville patrol officer would have to radio the Danville dispatcher, who would then pick up the telephone and call another dispatcher, who in turn would relay the information by radio. This arrangement delayed communications and increased the risk that important information might be garbled as it changed hands so many times.

The new system also includes a dedicated connection between police dispatch centers. Dispatch personnel can now communicate directly with one another, and they can add more radio resources to the network as needed, using standard "patch" procedures with which they are already familiar.

See "What Is Voice over Internet Protocol?"

Getting Everyone on Board

Although officers on both sides of the Virginia-North Carolina border wanted to work toward better communications among their agencies, they were protective of their radio operations because of security concerns. No police department wants to risk having its emergency communications system crash because of an unforeseen technical problem. According to Broadfoot, participants in the pilot project were initially wary.

To protect the integrity of their 9-1-1 centers, for example, many law enforcement agencies put strict limitations on access to their communications systems, and they are leery of companies with which they do not normally do business. This pilot project forged communications links by using equipment that had not previously been used in a law enforcement setting.

That took a big leap of faith for these folks," Broadfoot said.

Also, with five agencies using radios from different vendors, it appeared to some that linking the systems would be difficult. "It becomes quite a project to convince people that it can be done," Broadfoot noted. Luckily, he added, law enforcement agencies are accustomed to working together: "When you look at the chiefs and sheriffs, they're saying, 'We're all in this for public safety.'"

Jeff Frazier, director of the Internet Business Solutions Group at Cisco Systems, said that one thing company officials underestimated was the difficulty of simply getting radio experts on board in a project that involved blending newer technologies with the radio networks that police departments have come to rely on and trust.

"We're bringing network technology into a radio world," Frazier said. "The people in the radio world see that as a big threat."

As everyone came to see this as an opportunity to take part in an innovative project, however, even the usual rivalries between private-sector companies decreased.

"I thought it was great," Frazier said. "We have multiple organizations communicating in ways they never thought possible."

Allan Sadowski, the information technology manager for NCSHP, said one of the challenges involved in any interoperability project that combines radio systems with network Internet protocol systems is the different backgrounds of the technical people involved.

Sadowski recommends getting all technical people involved at the early stages of an interoperability project to help prevent misunderstandings and ensure that everyone is working well together.

Yet even when the technical people are working together, they might run into a roadblock caused by strict network security policies designed to protect police communications systems. For example, to avoid computer viruses, hacking and other threats, NCSHP's private network is insulated from normal Internet traffic. Initially, it seemed impossible for the agency to keep its strict policy in place and still participate in the VoIP system. However, engineers created a break within the network that converted digital signals to analog voice signals and then sent them a short distance before reconverting them to digital signals. This process protected the private network from digital threats, such as intrusions by hackers and viruses, allowing NCSHP to take part in the project without violating its security policies.

Sadowski said patrol officers are pleased with the results of the project because now they can communicate across the state line when they need to. "They can talk to dispatchers immediately," he said. "With a few mouse clicks, officers are talking to officers. They love it."

Michael Welch, sheriff of Caswell County, said that the project has led to significant improvements, giving officers an option that many citizens thought they already had. "A lot of people didn't understand that we didn't have that ability to talk car-to-car," he said.

Officers have been pleased because it gives them more options and the possibility of getting more help in a variety of situations, Welch said. "It has been a real morale booster," he added.

Jim Davis, director of emergency management and communications in Pittsylvania County, said that although the project seemed a bit daunting at first, the county communications team found it easy to do once they got started. Davis noted that the ability to add more communications links as needed is impressive. "I think it's going to be a great tool — and not just for law enforcement," he said.

Indeed, the project has already moved beyond law enforcement to a broader public safety setting, as the jurisdictions have added fire and emergency medical services to the network. The project is a step toward giving law enforcement agencies an alternative, assured communications network when other systems are not working.

Joseph Heaps, deputy chief of NIJ's Information and Sensors Technologies Division and program manager for the project, said this pilot has been valuable both because the technology works and because other public safety agencies can learn what obstacles they may face in similar efforts.

"Integrating commercial off-the-shelf equipment can improve interoperability among radio systems, but the process is not as straightforward as the vendors may lead you to believe," Heaps said. "Budgets for planning and additional customization may be required. But if the proper planning is done in advance, these solutions can offer cost-effective options for linking radio systems together and improving public safety communications."

Sidebar: What Is Voice over Internet Protocol

An increasing number of businesses and consumers are using Voice over Internet Protocol (VoIP) as an alternative to standard telephone service. VoIP converts voice signals to a digital format, which allows the signals to travel over the Internet or private networks that use Internet technology. At the receiving end, they are converted back to ordinary voice signals. The technology allows both voice and data to travel on the same networks. A variety of VoIP products are available, including standard computers.

Open networks such as the Internet have inherent security problems, such as vulnerability to computer viruses, so most public safety organizations that adopt VoIP products elect to use private networks.

Philip Bulman is a writer and editor at the National Institute of Justice. He has 25 years of experience as a journalist and writer specializing in science policy, scientific research and technology development.