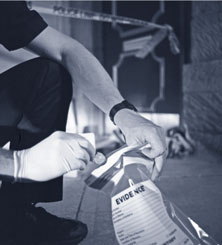 The large backlog of evidence awaiting analysis in the nation's crime labs has received much attention of late.

A recent survey funded by the National Institute of Justice and conducted by RTI International looked at a related issue: forensic evidence stored in police property rooms that has not gone to a lab for analysis. Based on a survey of more than 2,000 police departments, researchers determined that forensic evidence existed but had not been sent to a lab in:

There are many legitimate reasons why evidence collected from a crime scene would not go to a lab. Evidence may not go to a lab if prosecutors drop the charges against the alleged perpetrator or if someone pleads guilty to the crime. In rape cases, officials may not analyze sperm or other evidence if consent, but not identity, is the contested issue. Finally, some evidence is not sent to the lab because it would not help identify a perpetrator or solve the crime. But these reasons may not explain the entire inventory of unanalyzed property room evidence.

Untested evidence in law enforcement agencies is not considered part of the backlog because it is not actually awaiting analysis in labs. Understanding the policies behind these numbers may help improve how law enforcement uses forensic evidence.

Is There a Knowledge Gap?

Researchers from RTI International asked police departments about forensic evidence that did not go to their crime labs. The survey, which reflects the national situation in 2007, covered fingerprints, firearms, tool marks and biological evidence, including DNA.

The findings suggest that some law enforcement agencies may not fully understand the potential value of forensic evidence in developing new leads in a criminal investigation. For example, police departments cited several reasons for not sending forensic evidence to the lab.

(The above table lists the cited reasons: they could check all that applied.)

The most common reason police do not send evidence to the lab — no suspect identified — may reflect a mindset in some departments that forensic evidence helps in prosecuting a named suspect, but not necessarily in developing new investigatory leads.

This finding is troubling because evidence that contains DNA might identify a suspect through the Combined DNA Index System (CODIS, the national DNA database) even when police have no other clues. Similarly, evidence that contains latent fingerprints might identify an unknown suspect through automated systems like the national Integrated Automated Fingerprint Identification System, or IAFIS. Targeted training could help law enforcement agencies that are not taking advantage of such systems.

Another finding from the survey suggests that some police departments are having trouble prioritizing which evidence to process. For example, 15 percent of the agencies said they did not send evidence to the lab unless a prosecutor requested it. Some jurisdictions may be trying to avoid a seemingly unnecessary use of lab resources by asking the prosecutor to indicate that a case will go forward.

Agencies make such cost-benefit analyses every day as they triage cases. However, some prioritization policies may unwittingly limit opportunities for "no suspect" CODIS hits. Two other key findings related to prioritization, capacity and backlogs are:

One survey goal was to learn how many law enforcement agencies have a computerized information system that can track forensic evidence.

Only 44 percent of law enforcement agencies in the country have such a system. Three out of four large departments (with more than 100 officers) have a computerized tracking system.

With respect to evidence retention policies, the survey found significant variation across jurisdictions. Only 46 percent of the law enforcement agencies said they had a policy requiring the preservation of biological evidence in cases in which the defendant was found guilty. Another 38 percent said they had no such policy, and nearly 16 percent said they were unsure if they had such a policy.

Where to From Here?

How many of the unsolved cases with forensic evidence might be solved — or yield investigative leads — if a lab analyzed evidence currently in police custody?

The survey did not try to answer this question, but it merits more investigation. Indeed, the researchers recommended more study, including a scientific, "best-practices" look at how, considering current financial realities, such cases should be prioritized for testing. This would include how to solve the greatest number of cases, help the greatest number of victims to reach closure, and bring the worst criminals to justice.

The survey also did not address unsolved cases in which evidence was previously analyzed to no avail but which now — with the benefit of larger offender databases and new forensic technologies — might yield leads or be solved. For example, a latent print run through IAFIS several years ago with no successful match might result in a match if resubmitted today.

Any overall increase in forensic evidence sent to crime labs for analysis will have an impact on existing backlogs. With property crimes, for instance, collecting and analyzing DNA evidence can have a significant effect on arrests and prosecutions. An NIJ-funded five-city field test in 2008 showed that collecting and analyzing DNA evidence in burglaries resulted in new investigatory leads, more arrests and higher closure rates.[1] However, the burden of collecting, analyzing and acting on DNA evidence from every burglary would be cataclysmic for some police departments, crime labs, prosecutors and legal aid defense lawyers without a major infusion of additional resources. Moreover, burglaries are just a start. All told, there were more than 4.5 million unsolved property crimes in 2007. Any one of these crimes could potentially yield forensic evidence. Jurisdictions need to consider the costs and benefits of policies that involve DNA testing for all property crimes.

Based on data from the survey, the researchers made the following recommendations:

Besides thinking about how some of these recommendations might work, it may be important to pay greater attention to small- to mid-sized police departments. The survey revealed, for example, that police agencies with fewer than 50 officers accounted for nearly three out of 10 unsolved rape cases that contain unanalyzed forensic evidence. As the researchers note, larger agencies may have more capacity (staff to apply for and manage evidence processing and testing grants) than smaller agencies, but small agencies have a significant contribution to make in solving crimes and successfully prosecuting criminals.

Read the full report of The 2007 Survey of Law Enforcement Forensic Evidence Processing (pdf, 83 pages), which offers new insight into this issue.

Nancy Ritter is a writer with the National Institute of Justice.