Has Rape Reporting Increased Over Time?

During the past three decades, women have become more likely to report rapes and attempted rapes—particularly those involving known assailants—to police. Reporting by others, such as friends and family members, has also risen.

Past studies have shown increases in reporting, but they did not consider changes in the types of incidents occurring or being reported. “Reporting trends without the details—such as crime completion, presence of a weapon, or victim-offender relationship—can be misleading,” researcher Eric Baumer points out. “Changes in willingness to report can be confused with changes in the nature of the crimes themselves.” So Baumer aimed for a more comprehensive study that considered such details.

Subjects interviewed in the National Crime Survey were not asked directly about rape. However, when the survey was redesigned in 1992 and renamed the National Crime Victimization Survey, interviewers began asking a series of questions about “unwanted sexual activity.” The number of sexual victimizations disclosed to interviewers in the second survey shot up, and fewer of them had been reported to police. Because of the survey redesign in 1992, data from the two periods cannot be compared.

Baumer also compared rape reporting with the reporting of other kinds of assaults to see whether broader social changes—such as declining social supports in the wake of violent crime—may have been associated with the changes. He found no significant increase in the likelihood of police notification of other types of assaults, so the increase was particular to rape.

The Rapist You Know

In the 1970’s and 1980’s, most of the increase in reporting was not from victims, but from third parties (friends, family members, or legal advocates). Among victims, the biggest increase in reporting was in cases where women had been attacked by people they knew. Historically, such cases had been much less likely to be reported. As a result of this large increase, the gap between the reporting of known-assailant cases and stranger cases narrowed. During the 1990’s, reporting of rapes committed by known assailants and strangers increased both among third parties and victims. By this time, sexual assault was equally likely to be reported to the police, whether or not the victim knew the person committing the crime, though third parties were still less likely to report if the assailant was known to the victim. 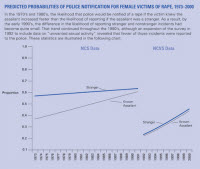 During the 1970’s, 1980’s, and 1990’s, transformations were taking place in the way Americans defined and responded to rape. Social and political movements—along with changes in the law—encouraged women to inform police about sex crimes. Academics, victim service providers, law enforcement officers, and others continue to debate how these shifts affected perceptions of women, rape, and sexual behavior. But most important, queried Baumer in his study, “Did these changes alter behavior?”

Baumer didn’t study the effects of changing attitudes on reporting, but he believes his research can be used to assess them indirectly. He suggests that the increases he found were consistent with changes in law and culture that removed many of the institutional and social barriers to reporting.

Reporting increases were greatest among women raped by acquaintances—especially well-known acquaintances, spouses, or ex-spouses. This makes sense, Baumer believes, given the focus of legal and social reforms on broadening the definition of rape and reducing obstacles to prosecution in such cases.

Although legal, social, and political reforms appear to have improved the chances that a rape or attempted rape will be reported to police, most victims still do not report.

Between 1992 and 2000, an average of 31 percent of attempted and completed rapes were reported.[3] That rate increased over the decade, but the fact remains that less than half of such crimes are reported to police.

Baumer suggests that work be done to identify the policies or practices that encourage reporting and to apply those practices elsewhere. Such a strategy might, in turn, increase the chance of arrest and prosecution and, ultimately, the deterrent effect of the criminal justice system.