Elder Abuse Emerges From the Shadows of Public Consciousness

Two recent studies shed light on the prevalence and detection of an often overlooked crime. 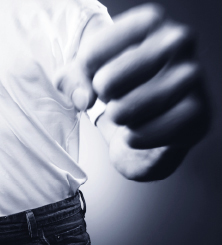 Detective Cherie Hill was skeptical, to say the least.

An elderly woman was trying to convince her that her grandson, who lived with her, had not hurt her. Standing in the police station in Anaheim, Calif., surrounded by half a dozen family members, the woman told Hill that a cereal box had fallen on her wrist and caused a bruise. Hill, an experienced elder abuse investigator, looked closely at the bruising, which went all the way around her wrist. She surmised that a cereal box — even a large, airborne cereal box — would not likely wrap itself around someone's wrist when it landed and cause that degree of bruising. Then there was the additional bruise on her face that police officers had noticed when they first responded to the call. The 23-yearold grandson had been arrested and was in jail. Hill suspected that family members were now pressuring the woman to recant to get the grandson released. She had initially told neighbors that her grandson had grabbed her and hit her.

Hill asked Dr. Laura Mosqueda to examine the bruises. Mosqueda is director of geriatrics at the University of California, Irvine Medical Center. She has also studied bruising in the elderly to determine a scientific basis for distinguishing accidental bruises from abusive bruises. Mosqueda believed the bruising was abusive. In addition, during the conversation the elderly woman, who had dementia, repeated that her grandson had grabbed her.

Prosecutors later charged the grandson with elder abuse. He was found guilty. The judge in the case placed the young man on probation and issued a protective order. Two pioneering studies of bruising in the elderly sponsored by the National Institute of Justice helped investigators in this and many other cases, Hill said.

"These studies are really important for law enforcement," she said. "It has completely changed the way prosecutors handle these cases. It's just really phenomenal."

Many people believe that bruising in elderly people is normal because they are more likely to experience accidental falls. Indeed, a combination of factors such as thinner skin and less subcutaneous fat does make bruising more common among older people than their younger peers. So researchers decided to study "normal" bruising in elderly people and then follow up with a separate study of bruising that resulted from physical abuse.

A Scientific Look at Bruising

To learn what normal bruising looked like, researchers recruited 101 people, 65 or older, with an average age of 83. Trained interviewers went to their homes every day for six weeks. Participants undressed and were examined from head to toe for bruises. Each bruise was photographed, and the interviewers documented their location, size and color and noted how long it took for the bruises to fade. The researchers found that 90 percent of the bruises were on the extremities. Not a single accidental bruise was found on the neck, ears, genitals, buttocks or soles of the feet. Of the 20 large bruises (larger than 5 centimeters — about 2 inches — in diameter) only one occurred on the trunk of the body. Red and purple were the most common colors on the first day that a bruise appeared. However, some fresh bruises were yellow, a significant finding because many people believe that yellow bruises are more likely to be older. Indeed, yellow was the most common color in bruises that stayed visible for more than three weeks.

Once researchers knew what accidental bruising looked like, they turned their attention to deliberately inflicted bruising. Stark differences emerged. The team of researchers examined 67 people, 65 and older, who had been reported to adult protective services as possible abuse victims. An expert panel confirmed the abuse before including the people in the study. Seventy-two percent of those who had been physically abused within 30 days before examination had bruises. When compared with the previous group (who had not been abused), they had significantly larger bruises. Another important finding is that 91 percent knew what caused their bruises. Only 28.6 percent of the comparison group — those who had normal, non-abusive bruising — remembered the incident that caused their accidental bruises

Abusive bruises are often larger. More than half are 2 inches or larger in diameter. The physically abused elders were much more likely to have bruises on the head and neck, especially the face, and on the posterior torso. Researchers also noted significant bruising on the right arm, perhaps because people raised their arms in an attempt to block an attacker.

Aileen Wiglesworth, a gerontologist and assistant professor at the University of California, Irvine, worked on both studies. Wiglesworth said that although the studies give police and prosecutors forensic markers that are vital tools in elder abuse cases, more work remains on other fronts, even on basic issues like the credibility of people who ask for help.

"People tend not to believe elders," she said.

Some people assume that memory loss and dementia afflict all elders, making them unreliable witnesses. The reality is that even some people with dementia can talk about abuse; they may forget small details, but they are likely to remember emotionally charged events.

"With dementia, they don't remember things with no emotional content," Wiglesworth said.

People who work in the field face a host of other challenges as well. Elders typically want to protect family members and are reluctant to report abuse. Sometimes family members are striving to take care of an elderly person but fall short. This may not involve outright abuse, but neglect or the simple inability to care properly for an elderly person. In those cases social service agencies can often help, Wiglesworth said.

See "The Prevalence of Elder Abuse"

"We need a whole lot more remedies than just going to court, and that's something we're really concerned about," she said "We're not out to put every caregiver in jail."

Mosqueda, who has worked on hundreds of elder abuse cases, said there are many obstacles, including hesitation by police and prosecutors because they do not know how to confirm a claim. "They say, 'They said they were hit, but they've got Alzheimer's; we can't believe them,'" she said.

Or, sometimes people will assume that a death was due to natural causes because of a person's advanced age. Mosqueda describes a common attitude in these terms: "Old people are supposed to die. Haven't you heard?" As a result, doctors and others who suspect abuse often have trouble involving law enforcement in cases, Mosqueda said. "Many times we are just dragging the police, begging to get them involved," she said.

One complicating factor in some cases is detecting negligence. Still, the results of negligence can be just as bad, Mosqueda said. "There are people who are being neglected to death, dying under horrible circumstances," she said.

Some law enforcement agencies are developing expertise in elder abuse, but the field is in its infancy in many regions. Besides, while researchers have been able to recruit participants for bruising studies from local communities, these do not include the many elderly who live in nursing homes, Mosqueda said.

Although researchers and others concerned about elder abuse face many obstacles, they are gradually becoming more successful. Michael Uhlarik, a former prosecutor in Suffolk County, Mass., said the Suffolk County District Attorney's Office had teamed up with law enforcement and social workers to share information and decide how best to pursue cases. Uhlarik, who is now a judge, said the group was able to offer training for police, prosecutors and doctors. Once they become familiar with the reality of elder abuse, some people will become passionate about the cause.

"You have to find a handful of committed people who think this is the issue," Uhlarik said.

Kelly Higashi, Chief of the Sex Offense and Domestic Violence Section of the United States Attorney's Office in Washington, D.C., agreed that a certain degree of specialization is worthwhile.

"It is important to get people to develop expertise in this area," she said.

Because of the unique legal status of the District of Columbia, the U.S. Attorney's Office prosecutes local crimes as well as federal crimes. Higashi's unit handles elder abuse as part of its broader mission. Sometimes the office has faced extraordinary challenges in pursuing cases. For example, in a 1999 case a man was able to enter a group home because a security alarm had been turned off. He raped a 77-year-old female resident who was suffering from paranoid schizophrenia. The victim was terrified and embarrassed about the incident. Maria Shumar, a victim-witness advocate in the U.S. Attorney's Office, worked closely with the woman, even taking her to the courtroom ahead of time so she could see what it looked like and practice sitting in the witness stand. "It was a tough case because the defense grilled her for a day," Shumar recalled. Still, the assailant was convicted.

While such cases involving assaults by strangers do occur, more often crimes against the elderly are perpetrated by family members or other people who know the victim. Some examples from Higashi's office include:

The victim-witness advocates may work on everything from trial preparation to helping someone find new housing. Higashi believes that their work has been critical to her office's success. "Having a good number of advocates and having them specialized and having them co-located is helpful," she said.

A number of factors are now converging that may improve the outlook for elder abuse. Prosecutors have won high-profile cases in Washington, D.C., and other cities. Law enforcement officers are becoming increasingly aware of the elder abuse problem and now have solid forensic studies to rely on. Moreover, the public is growing more aware of this previously hidden problem.

"We have a window of opportunity like we've never had before with elder abuse," Shumar said.

Philip Bulman is the editor of the NIJ Journal.