Detecting Items Hidden on a Person 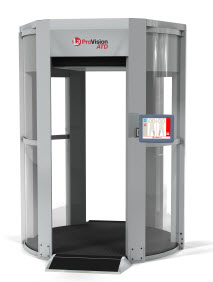 Devices that use millimeter-wave radar can detect both metal and nonmetal objects and displays them on a screen.

NIJ is supporting the development of devices and systems to detect forbidden items hidden on a person's body, in or under clothes.

Some of these devices and systems use millimeter-wave (mmW) radar, which penetrates clothing but is reflected from the body. It can detect both metal and non-metal objects and display them as images on a video screen.

NIJ began funding research into mmW technology in the mid-1990s and has continued to fund demonstrations in operational settings, including deployment and evaluation in jails and prison.

For example, the ProVision Active Millimeter-Wave Whole Body Imager is a security screening portal that detects metallic and non-metallic threats and contraband. Subjects are directed to stand inside the booth and lift their arms over their head for a two-second scan that generates an image in about 8 seconds. Assisted by computer analysis, the operator examines the image to find forbidden items or objects that require further investigation. This technology is also being used by the Transportation Security Administration for airport screening.

NIJ funding contributed to the development and field-testing of a hand-held device that combines metal detection with ultrasound detection of nonmetal objects.

Another concept for detecting items hidden on a person involves combining metal detection with ultrasound detection of non-metallic objects. A prototype hand-held, battery-operated Weapons and Non-permitted Devices Detector (WANDD) was developed and demonstrated at a local correctional facility. The WANDD detects metal and non-metallic contraband objects hidden on a clothed person, including plastic knives, wadded money, guns, cell phones, cigarette lighters and keys. This is an improvement over current hand-held detectors that only detect metal.