Why Is Gang-Membership Prevention Important? 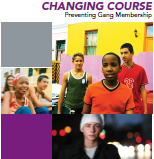 This page gives an overview of one section of the book Changing Course: Preventing Gang Membership.

Learn more about the book and how to get copies.

Gangs are a serious, persistent problem. According to the National Youth Gang Survey, from 2002 to 2010, the estimated number of youth gangs increased by nearly 35 percent (from 21,800 to 29,400). Some data indicate that nearly half of high school students report that some students in their school consider themselves part of a gang. Nearly one in five students in grades 6 through 12 report that their school has gangs. In addition, one-third (34 percent) of cities, towns and rural counties reported gang problems in 2010.

Joining a gang poses serious consequences — not just to the individual but also to his or her entire community; high-rate gang offenders impose an enormous societal cost. Gang members account for a disproportionate amount of crime in the communities where gangs are particularly active. Other negative impacts include loss of property values, weakened informal social-control mechanisms and families leaving neighborhoods.

Over the course of a lifetime, a high-rate criminal offender can impose some $4.2 to $7.2 million in costs on society. [1],[2] However, the costs are relatively low during the early years of a chronic offender’s life — totaling about $3,000 at age 10. [3] This finding suggests that early prevention efforts that focus on youth in high-risk settings before problem behaviors develop can result in large cost savings to communities.