What Is Carbon Dating?

Standard carbon-14 testing, as used by archaeologists, is based on the natural process of radioactive carbon formation that results from cosmic ray bombardment of nitrogen in the earth's upper atmosphere. The radioactive carbon is taken from the atmosphere and incorporated into plant tissues by plant photosynthesis. It is then incorporated into all living organisms by means of the food chain. After an organism dies, its level of carbon-14 gradually declines at a predictable pace, with a half-life of about 5,730 years. Archaeologists precisely measure levels of the isotope in organic remains. Knowing the halflife, they back calculate how much time must have passed since the remains had levels identical to living organisms. Radiocarbon measurement can date organic remains up to about 50,000 years old. Objects younger than 500 years old are rarely radiocarbon dated. Natural and anthropogenic fluctuations in environmental radiocarbon levels mean that organisms living in different centuries within the past 500 years can have identical radiocarbon contents. 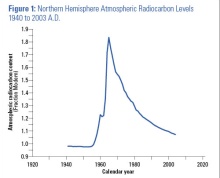 Forensic scientists use carbon-14 measurement in a subtly different manner. A large increase in atmospheric carbon-14 occurred when the United States and several other countries tested nuclear weapons aboveground during the 1950s and 1960s (see Figure 1). The Nuclear Test-Ban Treaty of 1963 effectively ended the era of atmospheric testing for most nuclear powers. Since then, atmospheric carbon-14 levels have been declining as the radiocarbon is soaked up by the oceans and the biosphere. The radiocarbon created by the thermonuclear explosions is identical to naturally created radiocarbon, and its route into plant and animal tissues is the same. It has resulted in artificially high levels of carbon-14 in plants and animals living in the past 60 years.

The forensic use of carbon-14 measurement does not rely on the slow decay process. Instead, tissue carbon-14 levels are directly compared to levels in a rapidly changing atmosphere. Using biological knowledge of the timing of a particular tissue's formation, one calculates the year of birth or death of the organism from which the tissue was derived.

This article appeared in NIJ Journal Issue 269, March 2012, as a sidebar to the article Applying Carbon-14 Dating to Recent Human Remains by Philip Bulman with Danielle McLeod-Henning.