Through Their Eyes: How Prisoners Make Sense of Their Incarceration

The penal consciousness framework offers a new way to understand the experiences of punishment.
Download and print 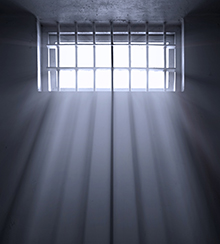 A new theoretical framework looks at punishment from the prisoner's perspective and reveals how the lived experience of punishment differs from the punishment conceived by lawmakers "on the books."

While conducting dissertation research partially funded by NIJ at the University of California, Irvine, researcher Lori Sexton examined the experiences of 80 male and female persons under direct and indirect supervision in three Ohio state prisons.[1] How do they understand and orient to being in prison? Do they interpret punishment in different ways? She used qualitative interview data to develop the "penal consciousness" framework. This new theoretical framework moves beyond the objective aspects of incarceration to help us understand the subjective experience of punishment, specifically how do people who are incarcerated make sense of their time in prison.[2]

Sexton first organized the punishments described by prisoners into two conceptual categories: concrete and symbolic. Concrete punishments — the presence or absence of concrete, material things — described by them included the breakdown of amenities (for example, microwaves, televisions and recreation equipment); the denial of appropriate hygiene and personal grooming products; the removal of privileges; and the imposition of administrative sanctions, such as disciplinary tickets, "early bed" and "cell isolation."

Symbolic punishments are losses and deprivations representative of something larger. Nearly all who were interviewed agreed that simply being in prison was a big part of their punishment. In addition, four symbolic punishments loomed largest for them: the related losses of autonomy, self and humanity — all connected to this loss of freedom — and the loss of family.

The Salience and Severity of Punishment

Sexton went beyond simply cataloging the array of punishments described by the 80 prisoners. She also looked at how the experience of punishment varies using two dimensions that arose inductively from the data: severity (the punishment's intensity as experienced by incarcerated persons) and salience (the importance of punishment in their minds and lives).

While severity of punishment reveals intensity, salience reflects how prominent punishment is in the daily lives and minds of the incarcerated population. Like severity, salience exists on a spectrum from imperceptibly low to strikingly high. It depends not only on individuals' experiences of punishment but also on their expectations of punishment. The distance between what a prisoner expects and what he or she experiences — what Sexton calls the "punishment gap" — largely determines the salience of the punishment. Expectations vary widely and are influenced by first-hand experience or vicarious accounts of what prison is like, as well as prisoners' knowledge of appropriate punishments for certain crimes and their sense of fairness or justice.

As Sexton examined the interplay between severity and salience, four unique narratives of penal consciousness — or stories that they tell about the meaning and place of punishment in their lives — began to emerge from the data. These narratives do not describe types of prisoners; instead, they portray the different ways that they situate punishment in the larger landscape of what they consider to be their "real" lives. Because punishment is constantly in flux and prisoners continually reconfigure their experiences and expectations, these narratives can shift over time. And because punishment is multifaceted and complex, they may experience more than one narrative at the same time.

The Role of Supervision Style and Gender

By studying the subjective experiences of incarcerated people, the penal consciousness framework allows us to understand variations in the lived experience of punishment and how punishment "on the ground" differs from the punishment conceived by lawmakers "on the books."

The gap between punishment on the books and punishment in action has potential policy implications. The criminal justice system is predicated on knowable, measureable penalties. But the subjective nature of punishment means that no single individual's punishment can possibly be known before it is experienced. As such, correctional officials may be able to develop management strategies that are attentive to differences in penal consciousness.

Reducing both the severity and salience of punishment as experienced by those who are incarcerated may be a viable way to achieve the rehabilitative goals of our correctional system. Sexton's findings suggest that direct supervision — which produces a low severity of punishment and is associated with the experience of punishment as compatible with life — has a normalizing, humanizing effect. Whether this effect has lasting, positive outcomes for their re-entry remains to be seen, but given our knowledge of the challenges of community re-entry, it offers a promising strategy to explore and research further.

Nadine Frederique is a social science analyst in NIJ's Justice Systems Research Division. Lori Sexton is an assistant professor in the Department of Criminal Justice and Criminology at the University of Missouri-Kansas City.