Relationship Abuse During the Transition From Adolescence to Young Adulthood

NIJ-funded researchers help gain a better understanding of the consequences of adolescent relationship abuse and its impact on the transition to adulthood.
Date Published
August 27, 2017

Teen dating violence is a critical public concern and a potential precursor to intimate partner violence in adulthood. To better understand this progression, NIJ funded researchers at Bowling Green State University to collect data from approximately 1,000 young adults (ages 25-28) who previously participated in the Toledo Adolescent Relationship Study (TARS)[1] when they were in seventh, ninth, or 11th grade. Based on this longitudinal sample, we have a better understanding of the trajectories and consequences of relationship abuse during adolescence through the transition into young adulthood.

Relationship abuse, whether it’s labeled teen dating violence during adolescence or intimate partner violence in adulthood, includes physical and sexual violence, psychological abuse, and stalking by current or past romantic or consensual partners, including spouses. Relationship abuse is complex and multifaceted. It is difficult to capture all aspects of relationship abuse in a single report, and this is no exception.

This study measured unwanted sexual pressures and physical abuse within relationships. The study also had questions about other indicators of relationship characteristics to better understand patterns and consequences of abuse.

The researchers examined perpetration and victimization patterns of relationship abuse from adolescence to young adulthood. Because this study has taken place in several “waves” over time, the researchers have been able to track continuity of and changes in relationships.[2]

By the end of young adulthood (around ages 25-28), a majority (56 percent) reported perpetrating or being a victim of some form of relationship abuse. Nearly 1 in 5 felt unwanted sexual pressures at some point within their romantic relationship. 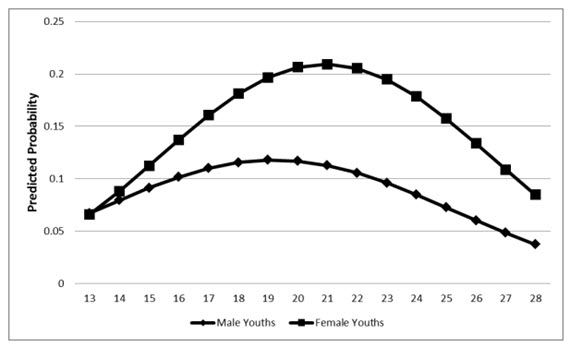 Figure 1: Age curve pattern for intimate partner violence perpetration by gender from ages 13 to 28. See page 10 of Patterns, Precursors, and Consequences of Teen Dating Violence: Analyzing Gendered and Generic Pathways for the full image and discussion.

Both perpetration and victimization peak around age 20 and then gradually decline through age 28. In adolescents, the age curve for relationship abuse showed similar rates for both males and females, but young adult females reported a significantly higher rate of perpetration than males (see Figure 1).

These gender differences should be interpreted cautiously. These data do not capture the greater amounts of fear, intimidation, and injury from different acts of intimate partner violence that women usually report. (For more information on these findings, watch an interview with Dr. Peggy Giordano “Understanding Teen Dating Violence.”)

Where relationship abuse was present, couples were more likely to be living together but not married, in casual sexual relationships, or breaking up and getting back together multiple times while dating. The risk of violence in the relationship increased if couples had lots of arguments about time spent with friends, finances, infidelity, and sexual exclusivity. Communication style in those arguments also mattered. When couples used negative forms of communication during arguments (i.e., “fought dirty”), it amplified the risk of violence.

In general, as youths developed higher quality relationships during the transition to adulthood, they moved away from abusive behaviors. In other words, as trust, intimacy, and commitment increased, the occurrences of relationship abuse decreased.

Moving Away from Relationship Abuse

There is a notion that “once an abuser, always an abuser,” but in this study that was not always the case. Additionally, very few participants (1.3 percent of men and 2.4 percent of women) reported relationship abuse in all of their relationships.

Dating violence in adolescence is associated with many negative physical and mental health outcomes,[3] and this study showed that these negative outcomes are present in young adulthood. Victimization and perpetration of relationship abuse were associated with self-reports of poor physical health and more concerns about health.

The analyses of this unique longitudinal sample of adolescents and young adults provide several insights for policy and practice.

First, relationship abuse peaks in young adulthood. When abuse begins in adulthood, it is associated with a greater number of violent incidents. This highlights the need for more prevention efforts that begin in adolescence and continue through young adulthood as well as new support systems for relationship abuse occurring in young adulthood. In a presentation at the National Institute of Justice, principal investigator Peggy Giordano stated, “It actually would be important to get a start early as they’re navigating these relationships, and try to interrupt these processes before they become chronic or firmly entrenched."[4]

Second, ending relationship violence potentially depends on teaching and fostering higher quality romantic relationships. Little relationship violence research has considered the dyadic and dynamic factors within the relationship as predictors of violence. This study found that these dynamics may be important predictors of abuse and cessation of abusive behaviors. Providing opportunities for adolescents and young adults to understand and learn about healthy relationship characteristics in addition to recognizing unhealthy aspects may provide a holistic and realistic approach to prevention and intervention.

Finally, relationship abuse has detrimental physical and psychological health consequences in young adulthood. It is important to note that psychological consequences were equal for men and women. Contrary to earlier research, this study showed that both men and women need equal opportunities to process and deal with violence within relationships. The findings provide further motivation to continue studying dating abuse as a critical public concern.

The research described in this article was supported by NIJ grant numbers 2010-MU-MU-0031 and 2012-IJ-CX-0015, awarded to Bowling Green State University. This article is based on the grant reports:

[note 2] It is important to note that this study only includes heterosexual couples in one region of the U.S.; thus, it may not be a representative sample of all adolescents and young adults across the nation.