Civil protective orders can be an effective tool for domestic violence prevention. 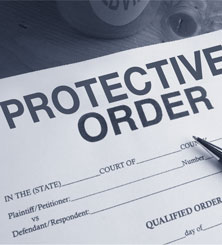 A study looked at the impact of civil protective orders for domestic violence victims in five Kentucky jurisdictions. Civil protective orders, sometimes known as restraining orders, may cover various situations, such as ordering an assailant to avoid a victim's home and workplace or forbidding any contact with the victim, including by mail or telephone. Findings from the study suggest that orders make a difference in safety, fear levels and cost savings. Moreover, urban and rural populations reported significant differences in fear. Half of the women who received protective orders did not experience a violation within the following six months. For the half who did experience violations, the levels of violence and abuse declined significantly compared with the six months before the protective order was issued.

Urban and rural women had similar views of the protective orders' effectiveness. However, rural women found more barriers to getting an order and having it enforced, thus experiencing less relief from fear and abuse. The study also explored the role of stalking in protective order violations and quantified the overall cost to society.

Teri Faragher, co-author of the report and executive director of the Domestic Violence Prevention Board in Lexington, Ky., said the findings would provide important information for practitioners. She said that knowing their interventions matter would make a difference for judges and prosecutors.

Researchers interviewed 213 women with protective orders in one urban and four rural jurisdictions. T.K. Logan of the University of Kentucky, the lead researcher, noted that the rural women were from the Appalachian area, which has received media attention because of drug use. This attention may have affected community differences such as law enforcement priorities if some agencies were focusing more on drug use than on domestic violence.

One significant finding is that, overall, rural women were more afraid of future harm than their urban counterparts. Participants rated the degree to which they feared future harm in various categories on a scale ranging from "not at all fearful" to "extremely fearful." More rural women were somewhat or extremely fearful in every category during the baseline interview and at the six-month follow-up. Six months after they were first interviewed, both rural and urban women reported that they felt less fearful once they got the protective orders. The chart below shows the percentage of women who reported being somewhat or extremely afraid of future harm by type of fear.

Factors such as isolation and fewer community services may contribute to higher fear levels for women in rural areas, and some fundamental differences between urban and rural women may also play a role. For example, the study found that rural women were more entrenched in their relationships. More rural women were or had been married to the men named in the protective orders. On average, they had been in their relationships longer and were more likely to have children in common with the men than their urban counterparts.

The study focused only on women who got protective orders and therefore cannot provide comparable data about women who did not seek or were denied protective orders. Consequently, it is not clear if the declines in violations and fear levels are a result of the protective orders, another factor or some combination of factors. Women who are more seriously injured or fearful may be more likely to seek protective orders than those who feel less threatened.

Barriers to Getting a Protective Order

To learn about the barriers to getting a protective order and their effects on rural and urban women, Logan interviewed 188 key participants, including judges, law enforcement officers, prosecutors, defense attorneys and court clerks. Other participants included victim services workers, such as advocates, legal aid attorneys, shelter staff and counselors.

In fact, rural respondents reported political barriers throughout the protective order process, saying that "who you know" and the "good ol' boy" network factored into the experience.

Kentucky Circuit Family Court Judge Jo Ann Wise said she was not surprised that judicial bias surfaced as a barrier, especially for rural women. "I've heard judicial bias myself. It's there," she said.

Urban women reported having trouble navigating the system, even though they reported it took (on average) one and a half hours to get their protective orders, compared with the two and half hours it took rural women. They also reported experiencing more confusion, encountering more problems and having more questions about the process than rural women. Urban women also expressed more fear of confronting their violent partners in court.

In prior research, Logan found that about half of the victims who get protective orders are stalked.[1] Overall, protective orders were less effective for stalking victims than for other victims. Specifically:

"I think that with stalkers we are dealing with a different kind of offender," Logan said. "This type of offender is costing the system all the way around. More assertively addressing stalking would save society more and help more victims. That's what the data point to."

Stalking victims were less likely than other women to report a protective order violation. They said they felt the complaint would not be taken seriously or they feared they did not have enough proof.

Faragher explained how her community is addressing stalking. In 2006, Faragher's Domestic Violence Prevention Board received an arrest and enforcement grant from the Department of Justice's Office on Violence Against Women and launched several domestic violence prevention programs. For example, in the Lexington-Fayette County police department, a police sergeant has been assigned to review all domestic violence reports. If the sergeant identifies stalking behaviors in a report that did not result in a stalking charge, the sergeant assigns the case to a domestic violence detective for further investigation. In addition, the sergeant uses the review as a training tool to provide information to patrol officers on how to intervene more effectively in cases involving stalking.

Wise said victims may not use the word "stalking," but the behavior is obvious in her courtroom.

"Stalking has changed the way I look at petitions," Wise said. "Stalking has always been a factor, but before these studies I didn't realize how much stalking affected victims. Now when I'm reading petitions I make a note of stalking behaviors. Big ones I see are 'He followed me to work. When I came out of work, he was at my car.' Or 'I've seen him driving by the house.' It's a serious factor I need to consider. There's such a strong connection to lethality."

Every January, the Department of Justice and the National Center for Victims of Crime promote National Stalking Awareness Month to educate the public and professionals about the dangers of stalking. The "Stalking Fact Sheet"[2] shows that 76 percent of females murdered in domestic violence incidents were stalked before they were killed and 54 percent reported stalking to the police before their deaths — statistics that support Logan's findings and Wise's concerns.

The Cost of Abuse and the Cost of Protective Orders

In collaboration with economist William Hoyt, Logan calculated the costs and benefits of protective orders — a useful measure in economically difficult times and one that few intervention studies consider.

According to the study, every dollar spent on the protective order intervention produced $30.75 in avoided costs to society. The state of Kentucky saved about $85 million over a one-year period because of significant declines in abuse and violence.

The savings included "relevant costs," such as service use, legal system use, lost opportunities and quality of life loss. Participants were asked to recall events during the six months before the study started and record information for six months after the protective order was issued. Participants included data about services (health services, mental health services, shelter and advocacy) used because of the abuse, time lost from work and other activities, and mileage and property losses stemming from the abuse. In addition, the women were asked to record the distress they experienced from the abuse for each month. A dollar amount was assigned to each factor, providing the basis for the analysis.

"The numbers are staggering," said Wise. "When she [Logan] broke it down to the cost benefit of having a protective order — it's amazing to see how much money we could save … right now in this economy, saving money and financial impact is something everyone wants to talk about."

"In family court, follow-up studies are invaluable to us," Wise said. "If we're not doing something effective, we want to know."

See "Research in Practice: When a Researcher-Practitioner Partnership Works."

Nikki Hawkins is a communications associate with Palladian Partners Inc. She is a former police officer for the city of Rockville, Md.