Practitioners and researchers discuss the benefits and challenges of working together.
Download and print 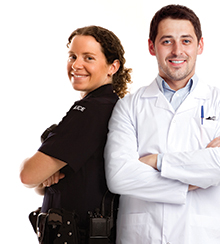 In 2009, NIJ funded a study examining the processing and prosecutorial outcomes of sexual assault cases. A team of researchers and practitioners focused specifically on case attrition, unfounded cases (those determined through investigation to be false or baseless) and cases cleared by exceptional means. Researchers were from Arizona State University and California State University, Los Angeles. Practitioners were from Los Angeles city and county law enforcement agencies. Together, they collected and analyzed data on male-female rapes from 2005 to 2009. The researchers also conducted in-depth interviews with law enforcement officers involved in responding to and investigating sexual assaults.

The researchers and practitioners involved in the study agreed that working together — though not always easy — was incredibly helpful in obtaining information to advance our understanding of sexual assault reporting, investigation and processing and to improve agency practices. Presented here are their insights[1] about the benefits and difficulties of the collaboration. They also offer some advice for those seeking to do similar work.

NIJ: How did this research idea come about, and how did you engage the police department? How did the department receive the idea, and what things happened to set the partnership in motion?

Cassia Spohn (CS)/Katharine Tellis (KT): When the [NIJ funding] solicitation came out, we felt that Los Angeles would be an ideal jurisdiction in which to conduct this study. We approached Deputy Chief Charlie Beck (currently Chief of the Los Angeles Police Department), and he was immediately receptive to the idea of an open and transparent analysis of sexual assault investigations in service of his department's commitment to quality through continuous improvement. Sheriff Lee Baca was equally supportive from the moment we reached out because sexual assault was the focus of his dissertation. Deputy Chief Beck and Sheriff Baca's support was critical in fostering relationships throughout their respective agencies and set the stage for expanding the partnership to include the Los Angeles County District Attorney's Office and victim advocacy agencies.

NIJ: When you look back at the first six months of the partnership, what were the toughest hurdles you had to overcome?

Assistant Chief Michel Moore (MM): The study began in January 2010, which was a time of significant change in the department's leadership. Charlie Beck, who was the department's Chief of Detectives when the study was first initiated, was appointed as the Chief of Police. Consequently, I was appointed as Assistant Chief, and the duties of the Chief of Detectives were brought within my sphere of responsibilities. The study was one of many initiatives that I was now responsible for moving forward, and admittedly in those initial days there was a pretty steep learning curve as to the work that needed to be accomplished. Ultimately, I believe we did a good job of meeting deadlines and being responsive to issues and questions from the researchers as they came up.

CS/KT: Researchers and practitioners come from distinct backgrounds with respect to training, vernacular, perceptions about desired outcomes and how they are measured, and concerns specific to their role within their agency. One thing that we have a renewed appreciation for at the end of this process is the salience of language and understanding the culture of the agency with which you are working.

NIJ: In hindsight, what would you do differently?

Captain Tom Zuniga (Ret.) (TZ): A meeting should have been held immediately with the researchers and department personnel who would play an integral role in gathering all requested reports, data and interviewees for the study. This would have allowed the researchers and department personnel to exchange information and address the needs of all concerned.

MM: I wish we had established dedicated workspace for the researchers at our facility. This would have promoted more effective communication and understanding of their needs.

NIJ: Can you talk about communication throughout the project?

CS/KT: Communication was one of the most critical factors in sustaining the project. We held ongoing meetings to provide status updates and address concerns of both the agencies and the researchers. It is important to note that the onus is on the researchers to (1) reach out to the agencies; (2) be as receptive to agency feedback as we hope agencies will be to our findings; (3) be transparent in methodologies and research questions; and (4) communicate in a way that is relevant to the agency and does not come off as "ivory towered" and out of touch with the "real" world of criminal justice.

TZ: The researchers communicated regularly via email and phone and in person, and they were always cordial with department personnel throughout the entire project. We communicated mostly with Katharine Tellis, who always seemed to be appreciative of our commitment to the project. She often commended our personnel for their hard work in supplying her and her colleagues with all requested material. The researchers were also timely in responding back to us when we called with questions.

MM: The researchers made a point of regularly touching base with us, letting us know of pending action items, providing drafts of papers and presentations for our review and feedback. This provided the opportunity to get a sense of the researchers' perspective as well as where the findings were leading.

NIJ: How did you address any communication issues?

MM: There were a number of discussions about word choice or descriptions that we felt didn't match our perspective on the ground. These discussions were ongoing and helpful. At times the discussions became fairly intense; some of the staff took issue with the conclusions being considered. However, everyone remained professional, and although we recognized that we would not necessarily agree with some of the researchers' findings or recommendations, it was important to stay focused on valuing the research for what could be identified as areas for improvement and strategies to accomplish.

TZ: The study revealed that some of our investigative practices had to be re-evaluated and corrected, but we were not in agreement with all of their findings, conclusions and recommendations. However, we value the study in that it provided us with a look at some of our investigative practices that required immediate attention. During these discussions, not everyone was in agreement with each other's perspectives. At times it was intense, but in the end, the meetings were beneficial.

CS/KT: We reached out to facilitate discussion and were open and willing to compromise while still retaining methodological integrity. For example, some law enforcement personnel were reluctant to speak, and understandably so, despite the support of their agency's leaders. We responded by addressing any concerns as best as possible and ultimately deferred to their personal preferences and comfort zones.

NIJ: How did the partners receive the research results?

CS/KT: The research yielded many discussions about the salience of arrest in sexual assault cases, law enforcement's use of the exceptional clearance, and what exactly the FBI's Uniform Crime Report Handbook means with respect to the word "charged" in the criteria required to clear cases by arrest and exceptional means. The Los Angeles Police Department and the Los Angeles County Sheriff's Department were quick to identify a need for refined training protocols for their sex crimes detectives and implemented changes before the study was completed.

TZ: This study brought to light myriad concerns and issues regarding the sexual assault investigative practices of both law enforcement agencies. Both agencies expressed concern and questioned the study's results. The findings, conclusions and recommendations were not well received by either agency for different reasons. Once the project was completed, all parties attached to this study understood each other's frustration as it related to their individual concerns. In some cases, the researchers met individually with agencies to address their frustration, and on other occasions we met as a group for open discussion. Some modifications were made, while other results remained unchanged. I believe that all agencies ultimately benefited from this study. It identified problematic areas of the investigative practices of some investigators that needed improvement. This study should be used as a resource and serve as a reminder to be open-minded to any change that will improve overall performance.

MM: Prior to our presentation at the International Association of Chiefs of Police conference in 2010, the researchers provided us with some summary statistics from our data about case characteristics and outcomes. We ran the numbers in-house for comparison and got different outcomes. After talking with the researchers, we realized they were using a more expansive definition of sexual assault than the FBI's Uniform Crime Report Part I definition. That's one example of how clarification and an open line of communication are needed. Ultimately, there were findings and recommendations that we did not agree with; however, the department found other areas of the study very helpful in identifying needed improvements.

NIJ: How have you incorporated the research results into practice?

TZ: This department took immediate steps toward correcting identified deficiencies in our investigative practices and recommended changes to our case clearance standards. The department has already written a policy on standardized procedures for detective unit operations and a newsletter on detective bureau case and suspect closure codes, and we have revised the case closure reference guide. We recently created a "Cleared by Arrest/Cleared by Exception" index card that will be distributed to all investigators to ensure continued compliance with the FBI's Uniform Crime Report program when a case is cleared. The training component of this corrective action plan is still in progress.

NIJ: What is the most important thing you learned from the process?

MM: The study has reinforced the value of independent research and critical reviews of our department's practices.

TZ: The person who is tasked with oversight of a large and lengthy project like this study requires subject knowledge and background to effectively deal with issues or concerns during the process. This is important because the process has many components that must be properly understood to avoid premature or faulty conclusions. A study must be evaluated objectively to recognize its strengths and weaknesses and determine if the study measures up to established scientific standards of excellence. We recognize and acknowledge the value of this study, its critical review of our investigative practices and how to make full use of the findings.

TZ: It is vitally important for agencies to know as much as they can about the study — including associated costs — before committing to it. Researchers should have complete knowledge of the law enforcement organization that will be involved. I recommend that the researchers meet all people involved in the project at the completion of the study to personally express their appreciation for their participation and hard work in meeting all requested deadlines.

MM: For law enforcement, I recommend that senior executives fully understand the project being considered to ensure sufficient resources are committed. Additionally, law enforcement executives need to invest in the project themselves to some extent to ensure more junior members of the organization are open to the research and debate.

CS/KT: Building relationships early on is critical. There needs to be a level of trust and openness between the researchers and the agency and some degree of mutual investment in the process. Otherwise what may be a mere bump in the road (for example, staff turnover, a computer programming shortfall, agency personnel who are skeptical of researchers) can turn into a barrier that undermines the ability of a study to move forward.

We can learn valuable lessons by documenting the experiences within researcher-practitioner partnerships. The project highlighted here demonstrates the need for clear communication, honesty and compromise throughout a research study. Such collaborations are learning experiences for both sides, and the end result can provide valuable knowledge to the field and improve organizational policy and practice.

Bethany Backes is a social science analyst and Melissa Rorie is an assistant professor at the University of Nevada, Las Vegas, and a former NIJ research assistant.