One influential scientist reflects on the pivotal role that NIJ funding has played during his prolific career in forensic science.
Download and print 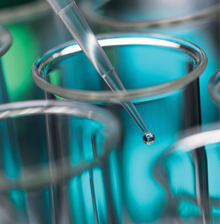 Science involves ideas, people and money. With the proper mix of these ingredients, today's research ideas can become tomorrow's reality. Groups that fund research, such as NIJ, the National Institutes of Health and the National Science Foundation, bet on people and their ideas based on proposals, submitted in the form of grant applications. Some bets succeed, and some fail. Since resources are limited, assessing the impact of funded research efforts over time is important. But what are the appropriate metrics of success? And what lessons can we learn from reviewing past funding? John M. Butler, Special Assistant to the Director for Forensic Science in the National Institute of Standards and Technology's (NIST's) Special Programs Office, discusses his experiences over the last 20 years and how NIJ support has made a difference in his life and in forensic science.

NIJ: Take us back to the beginning. What was your first experience with NIJ funding support?

John M. Butler (JMB): A $70,000 NIJ grant awarded to the University of Virginia (UVA) in 1993 literally changed the world of forensic DNA testing — and began my journey into the field of forensic science.

Ralph Allen at UVA and Bruce McCord at the FBI Academy's Forensic Science Research and Training Center in Quantico, Virginia, were looking to apply a new analytical separation technique called capillary electrophoresis (CE) to speed up and automate DNA testing of short tandem repeats (STRs). The NIJ grant allowed the two analytical chemists to bring a graduate student on board to work on the new forensic method. The grant covered some supplies, travel from Charlottesville to Quantico and tuition for two years.[1]

I had just completed my first year of graduate coursework at UVA, and on May 18, 1993, thanks to the NIJ grant, I began working at the FBI Laboratory under the guidance of Drs. Allen and McCord. The FBI supplied the instruments and the samples. I was the labor force in developing new methods involving CE. Little did I know that my work in this NIJ-UVA-FBI experiment would help pioneer the DNA analysis technique that is used worldwide today.

While working in Quantico, I volunteered to help on another project, which was looking for a rapid method to accurately determine the amount of DNA sample to put into mitochondrial DNA (mtDNA) sequencing reactions. I was able to use my CE instrument to actively analyze mtDNA polymerase chain reaction (PCR) products. Our team collaborated with the FBI's Forensic Science Research Unit, and by the end of that first summer, our hard work had paid off: We had a working method for extracting, amplifying and sequencing mtDNA from human hair.[2]

Things did not slow down. In fall 1993, I began developing new methods and exploring optimal conditions for rapid CE separation of STR markers. I presented my work at a CE conference and drafted my first article, which was published the following year.[3]

In February 1994, NIJ held a review of its grantees at the annual meeting of the American Academy of Forensic Sciences. I presented my research findings and reviewed the mtDNA quantitation technique I had developed in Quantico. But what really got everyone's attention was that, using the CE method, I performed the world's fastest separation of an STR allelic ladder at the time — a mere five minutes.[4] This was revolutionary because the separation method used at that time (slab gel electrophoresis) was labor-intensive, was not automated and provided poorly quantifiable results in two to three hours.

Back in Quantico, I continued my graduate research. I also had the opportunity to attend early meetings of the Technical Working Group on DNA Analysis Methods (TWGDAM), where I shared my research results, learned about the problems facing the community and got to know leaders in the forensic DNA community. Later, following the TWGDAM meeting in July 1995, I learned that Applied Biosystems, a primary supplier of forensic DNA reagents and instrumentation, was releasing a new CE instrument (the ABI 310 Genetic Analyzer[5]) and STR kits (AmpFlSTR Blue, Green I and Profiler). My graduate work — and that initial NIJ research grant — helped pioneer the technique that soon became the primary workhorse for DNA testing worldwide.

NIJ: Since that initial grant, what role has NIJ funding played in your career?

JMB: Over the years, NIJ funding has continued to make my research possible. After I served as a National Research Council postdoctoral fellow at NIST and the Armed Forces DNA Identification Laboratory (AFDIL),[6] an NIJ grant took me to the West Coast. Chris Becker, the president and CEO of a start-up company named GeneTrace Systems, Inc., based in Menlo Park, California, recruited me to work on rapid analysis of STRs using time-of-flight mass spectrometry. The NIJ-funded work[7] involved collaborating with the California Department of Justice, then located across the San Francisco Bay in Berkeley. I visited the department, which helped me better understand the challenges facing forensic laboratories and thus ensure that the DNA methods I developed would improve the capabilities of crime-solving laboratories.

When GeneTrace Systems decided to no longer pursue forensic DNA analysis, NIJ funding once again made it possible for me to change coasts. I returned to NIST to continue with my forensic science interests.[8] Annual funding provided through an interagency agreement between NIJ and NIST's Office of Law Enforcement Standards helped us create a world-class research group during the first decade of the 21st century.[9]

Throughout my career, NIJ funding has allowed me to conduct meaningful research, write books that have influenced the field, and interact with the scientific and legal communities. Hopefully, the funds that NIJ has invested in me have made, and will continue to make, a difference for good.

NIJ: How important has collaboration been in your research?

JMB: To lengthen the reach of our work, our NIST research team often collaborated with other NIJ grantees; many of these joint efforts took root during conversations at the annual NIJ DNA grantees meetings held in the early 2000s. Over the years, our NIST research team has published with my former advisor Bruce McCord (when he was at Ohio University and Florida International University) on miniSTRs and DNA recovery from damaged samples, with Marilyn Raymond from the National Cancer Institute on cat DNA assays, with Mike Hammer from the University of Arizona on Y-chromosome assays, and with Tom Parsons from AFDIL on mtDNA assays. More recently, we participated in DNA mixture training workshops with Catherine Grgicak and Robin Cotton from Boston University. Combining efforts with other NIJ-funded projects creates an important synergy and helps increase our collective impact on the forensic DNA community.

NIJ: Are there any particular lessons learned over the years that you would like to share with fellow scientists?

JMB: I've learned many things over the last 20 years. One of the most important is that to fully understand the problems that need to be solved, you must visit forensic laboratories and speak with the scientists about challenges they face. It is always best to understand the problem before producing a meaningless solution, which can sometimes happen with undirected research efforts. Once you complete your research, conduct training workshops in the laboratories and online to help translate research results into practice. Regular communication between researchers and practitioners is essential to move fields forward.

Hard work toward specific goals makes a difference. I try to think long-term but work as though everything depends on success in the short term. I always work to complete tasks that I agreed to do, such as providing regular reports on projects. This helps program planning and progress.

NIJ: You talked earlier about your graduate research experience. Do you have any specific advice for graduate students who are just starting out in the field or for their professors?

JMB: I would encourage university professors to give graduate students an opportunity to present their work at major conferences and help prepare them to succeed. As for students, collect and read everything available in the scientific literature about the problems you are trying to solve. Then write, rewrite and rewrite again until you can produce polished publications. The currency of scientific research is getting your results published in a peer-reviewed journal.

I have found that ideas for new research projects come as you pay attention to details in the articles you read, especially if you are reading more broadly than just in your area of focus. As Isaac Newton famously shared with a colleague, "If I have seen further it is by standing on the shoulders of giants."[10] Innovative research ideas come from connecting dots that, in many cases, earlier scientific research has already defined. Knowing the literature in your field and in complementary ones helps you move your field forward.[11] Perhaps one day future researchers will view your work as a "giant," from which they will be able to see further.

NIJ is now accepting proposals under the Research and Development in Forensic Science for Criminal Justice Purposes program for basic or applied research and development projects. The deadline for applications is February 1, 2016. Download the solicitation (pdf, 38 pages).

Author's note: I am grateful to NIJ program managers Richard Rau, Lisa Forman, Lois Tully and Minh Nguyen as well as others in NIJ leadership positions who enabled and supported funding for my research over the years. I have been blessed to have had wonderful mentors throughout my career; chief among them are Bruce McCord, Ralph Allen and Dennis Reeder. My NIST research efforts would not have been possible without supportive and hard-working colleagues, including Margaret Kline, Pete Vallone, Mike Coble, Jan Redman, Becky Hill Steffen, Amy Decker Hazelwood, Richard Schoske, Dave Duewer and Susan Ballou.

It also discusses several interagency agreements between NIJ and NIST.

[note 1] NIJ grant 93-IJ-CX-0030 not only started Butler's work in forensic science; it also funded a portion of research by Alice Isenberg, who also earned her Ph.D. from UVA in Bruce McCord's laboratory. Isenberg is now the FBI Laboratory's Deputy Director.

[note 4] Most STR separations today require about 30 minutes, because a longer capillary is used.

[note 5] Certain commercial equipment, instruments and materials are identified to specify experimental procedures as completely as possible. In no case does such identification imply a recommendation or endorsement by NIJ or NIST; nor does it imply that any of the materials, instruments or equipment identified are necessarily the best available for the purpose.

John M. Butler is a National Institute of Standards and Technology (NIST) Fellow and Special Assistant to the Director for Forensic Science in NIST's Special Programs Office, where he assists with strategic planning and policy development. He also serves as vice chair of the National Commission on Forensic Science, a federal advisory committee to the Department of Justice that is working to improve the interface between science and the law. Thanks to NIJ funding throughout his career, Butler has written five textbooks defining the field of forensic DNA analysis, published more than 150 peer-reviewed articles and invited book chapters, and given more than 300 invited talks and training workshops.