Advances in modern technology have turned the days of a police officer’s handling a call, then driving back to the station to file a paper report into nothing more than scenes from old television shows.

Laptops, PDAs, broadband and Wi-Fi enable officers to file electronic reports from the scene and keep on moving to the next call, but these technology innovations also have other implications that are more far-reaching and more subtle.

Beginning in 2010, researchers from the School of Public and Environmental Affairs at Indiana University – Purdue University Indianapolis and the NLECTC Communications Technology Center of Excellence conducted a study on how the implementation of dedicated mobile broadband technology changed the way that the Brookline (Massachusetts) Police Department operated. Changes included improved information sharing with other departments, reduced time spent on administrative tasks, and improved police response time. As more departments move toward using some type of wireless network to decrease paperwork and improve response times, they are challenged by the need to create implementation plans and develop policies; this research provides implementation guidance by presenting best practices and evidence-based outcomes. It also seeks to establish an empirical foundation for future research.

The ability to complete such activities as filing a report or completing online training when away from the station has become critical. In addition to the necessary hardware and software, smooth implementation requires suitable wireless capability. 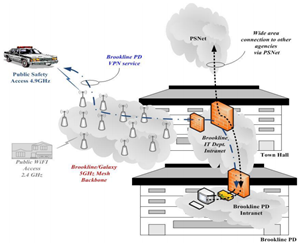 Brookline provided the research team with an opportunity to evaluate key operational issues related to implementing such access on a dedicated network, as well as the capability to specifically consider the role played by 4.9 GHz technology. Two primary questions guided the research: Was the wireless broadband technology implemented in accordance with initial expectations, and did the implementation have any effect on police operations related to information sharing, completion of job and administrative tasks, and response times to calls for service?

Interviews with selected officers suggest that the technology was not difficult to use and that it produced benefits such as increased access to timely information, increased information flow, and improved quality. Interviewees said It did seem that because the electronic reports included additional data fields, their use somewhat offset the time saved by not filing paper reports. However, it also increased the quality of available data.

Respondents to a web-based survey open to all personnel agreed with most of the findings from the interviews. In addition, secondary data analysis of computer-aided dispatch (CAD) data suggested that if the implementation of wireless broadband reduced departmental response times to calls for service, the impact was small and difficult to discern across patrol sectors.

As police patrol involves considerable time and resources, integrating technology into patrol functions should not only improve officer efficiency, it also should potentially free up additional resources to use for crime prevention or other activities. Additionally, it may also result in increased officer job satisfaction and improved citizen satisfaction with police performance.

The work described in this article was supported by NIJ cooperative agreement number 2010-IJ-CX-K023, awarded to Engility Corporation, which operated the NLECTC Communications Technology Center of Excellence.

This article is based on the grantee report “Impact of Mobile Broadband Data Access on Police Operations: An Exploratory Case Study of One Medium-Sized Municipal Police Department” (pdf, 192 pages),Final Report.