Keeping Officers Safe on the Road 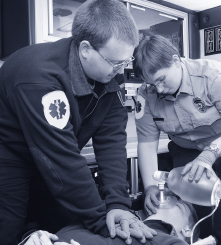 Early that Tuesday morning, Tome and the rest of the accident reconstruction team from the Northern York County Regional Police Department were on Route 15 in York County, Pa., investigating a fatal crash that had occurred days earlier. The team set up traffic cones to close the right lane of the road and began the investigation.

However, around 9 a.m., a passing sport-utility vehicle hit Tome where he stood in the right lane, sending him flying over a guardrail. Tome — a five-year veteran of the force, a husband and a father of two young children — died instantly. He was 31 years old.[1]

David Tome's story is tragic and sadly common. Every week, new stories emerge of law enforcement officers, firefighters and other first responders who are injured or killed in roadside crashes throughout the United States.

The National Institute of Justice has collaborated with fire service and automotive engineering agencies on several studies that address roadway safety. Increasing emergency vehicle visibility and developing training and tools aimed at keeping first responders safe on the road have emerged as next steps in the effort to prevent future tragedies.

Preliminary data for 2009 from the National Law Enforcement Officers Memorial Fund show that for the 12th year in a row, more officers were killed in the line of duty in traffic incidents than from any other cause of death, including shootings. These incidents comprise automobile and motorcycle crashes as well as officers struck while outside their vehicles. In 2009, 56 law enforcement officers had died in traffic-related incidents, accounting for close to 50 percent of officer deaths for the year.[2]

In the previous year, 28 out of the 118 firefighters who died while on duty were killed in vehicle crashes. Another five firefighters were struck and killed by vehicles.[3]

These sobering numbers clearly show the need to protect law enforcement officers, firefighters and other first responders as they perform their duties on the nation's streets and highways.

Visibility is essential to roadside safety for emergency responders. Can drivers see and recognize an emergency vehicle as it navigates through traffic on its way to the scene of an accident or fire? When the first responder has reached the scene and is on the side of the road, can drivers clearly see both the person and the vehicle?

Several factors affect a vehicle's visibility — its size and color, for example. Environmental conditions, such as the weather and time of day, also play a role in whether drivers can easily see emergency vehicles along the road.

Emergency vehicles have features designed to draw attention to their presence even when drivers are not actively looking for them. These include warning lights, sirens and horns, and retro-reflective striping, which reflects light back to its source. Such features provide information about the vehicle's size, position, speed and direction of travel so drivers can take suitable action.[4]

Some emergency response fields have national standards that govern the visibility of vehicles. The National Fire Protection Association's (NFPA's) Standard for Automotive Fire Apparatus requires fire trucks and ambulances in the United States to have retro-reflective striping and markings in multiple locations, including at least:

Although compliance with the NFPA standard is voluntary, vehicle manufacturers typically comply to limit liability and ensure the marketability of their products.[5]

Law enforcement does not have a similar national standard. However, many law enforcement agencies apply retro-reflective markings to patrol cars, motorcycles and other vehicles.[6]

The demands of the law enforcement profession also create unique visibility issues. Sometimes personnel do not want their cars to be readily detectable. Officers may want to be almost invisible to other drivers under certain circumstances. The need for high visibility at certain times must be balanced against a need for stealth at other times.

A recent study took a closer look at some commercially available products to determine whether they help increase emergency vehicle visibility and improve roadway safety for emergency responders and the public. The NIJ-funded research was conducted by the U.S. Fire Administration and the International Fire Service Training Association.[7]

Looking specifically at retro-reflective striping, high-visibility paint, built-in lighting and other reflectors on emergency vehicles, the researchers found that:

Researchers also identified ways for first responders to improve the ability of civilian drivers to see and recognize emergency vehicles during all phases of an emergency. These include:

USFA and the Society of Automotive Engineers conducted a separate NIJ-funded study to examine another important feature of emergency vehicles — warning lights.[8]

Researchers in this study looked specifically at how the color and intensity of warning lights affect driver vision and emergency vehicle safety during the day and night. They examined whether the lights alerted drivers to the presence and location of an emergency vehicle as intended or whether they unnecessarily distracted drivers or hindered their ability to detect emergency responders on foot.

"Right now, emergency lighting used by some departments is based on tradition and opinion," said Bill Troup, a fire program specialist at the USFA National Fire Data Center. "Some agencies use red warning lights; others use blue, and some use a combination of colors. Why are the colors this way? Because that's the way it's been done. It's tradition, and in some cases, this tradition has become state law. With this study, we wanted to add some science to the 'why' of emergency lighting."

The researchers asked study participants, who were representative of the driving public, to perform three tasks while viewing a simulated traffic scene:

During this field experiment, the researchers varied the color and intensity of the warning lights (using white, yellow, red and blue lights at low and high intensities). They also varied the location of the emergency vehicle (placing it to the left or right of participants) and the surrounding light (creating day and nighttime lighting conditions). The emergency responders wore two different sets of protective clothing. Both sets had standard retro-reflective markings; however, the background material on one set was black, and the other was yellow.

Based on these findings, the researchers offered three recommendations for improving safety during roadside emergencies:

Aside from research studies on vehicle visibility, NIJ also has supported developing Web-based tools that will help improve the safety of law enforcement officers, firefighters and other emergency responders on the roadways.

With support from NIJ, USFA collaborated with the Cumberland Valley Volunteer Firemen's Association's Emergency Responder Safety Institute to create ResponderSafety.com. This Web site contains the latest news and training on roadside safety as well as recent cases of responders who were injured or killed by vehicles while on duty. The site aims to be a place where transportation, public safety and emergency personnel around the country can share lessons learned, thus helping them to respond more safely and effectively to roadway incidents.

USFA also collaborated with the International Association of Firefighters to develop a separate Web-based training program called "Improving Apparatus Response and Roadway Operations Safety for the Career Fire Service." NIJ and USFA are working to expand this roadside safety training program to cover all emergency responders, including law enforcement. The program is scheduled to launch in 2010.

Roadside safety issues are complex. Using warning lights and retro-reflective material to increase an emergency vehicle's visibility is just one important focus area. Setting up a proper safety zone at the scene of an accident or other roadside hazard, as well as increasing the visibility of emergency responders on foot, is also critical. Perhaps one of the most essential parts of the equation is the alertness of civilian drivers and their ability to recognize an emergency vehicle and take suitable action to avoid a collision. NIJ will continue to work with law enforcement, firefighters and other emergency responders — and the public — to address these concerns and help improve safety for everyone on the road.

Beth Pearsall is a freelance writer. She is a former managing editor of the NIJ Journal.

See "Finding Safe and Effective Alternatives to the Highway Flare."

Beth Pearsall is a freelance writer. She is a former managing editor of the NIJ Journal.