A new test for detecting and identifying illegal drugs in oral fluids may be superior to the current test widely used in the field by law enforcement, according to researchers in this study.
Date Published
May 12, 2018

Noting the widespread need for rapid and reliable detection of illicit drugs by police and medical personnel, researchers with Florida International University (FIU) have developed a simple microfluidic device that uses nucleic acid-based aptamers to better identify parent drugs and their metabolites. Aptamers are single-stranded DNA or RNA molecules that bind easily and are specific in selecting their molecular targets.

Current drug tests used in the field by law enforcement and medical personnel are typically based on how an ingested drug reacts to antibodies contained in the drug test.  These antibody-based immunoassay tests are fast and sensitive, but their accuracy varies depending on the antibodies used and the drug in question. The use of an aptamer-based test, the researchers said, could solve the low sensitivity and poor selectivity inherent in the current antibody-based tests.

The FIU researchers, supported by an NIJ grant, developed a low-cost, portable, paper-based microfluidic device that can detect trace amounts of drug molecules in oral fluid with high specificity. The researchers focused on cocaine and methamphetamine as targets because those drugs are of particular interest in the health and criminal justice fields. 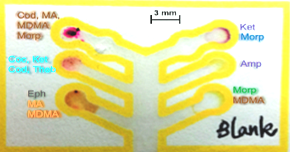 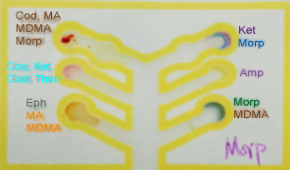 A demonstration of the microfluidic paper-based device in a blank sample (top) and a sample adulterated with morphine (bottom).

The “platform” the researchers developed was a postage stamp-sized paper-based device that contains six hydrophilic channels connected to a single central channel.  The channels form a tree-like pattern, with the drug-detecting branches connected to the central trunk. A liquid containing a suspect drug analyte wicks up the trunk and into the branches, which contain aptamers that react to specific drugs.  Each channel on a single detection device reacts to a different set of drugs, ranging from methamphetamine to MDMA (“ecstasy”).  Each branch turns a predetermined color when it has a positive reaction to a drug.

In addition to detecting cocaine, opioids, ketamine, and a variety of phenethylamine-based drugs, the device permits the user to identify drugs even in the presence of substances commonly used to dilute drugs, and distinguish drug samples from “common powders” such as aspirin, baking soda, and sea salts.

“Overall, we expect this procedure to greatly benefit forensic testing, customs, and other applications where quick, portable testing of unknown powders is necessary,” the researchers concluded.  “In addition, the project will establish the protocol for future detection of many of the new designer drugs such as synthetic cannabinoids and cathinones.”

The research described in this article was funded by NIJ award 2013-DN-BX-K032, awarded to Florida International University.

This article is based on the grantee report “Aptamer-Based, Exonuclease-Amplified, Paper Device for Point of Collection Screening of Cocaine and Methamphetamine in Oral Fluid” (pdf, 17 pages), by Yi Xiao (principal investigator), Florida International University.