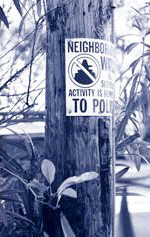 Every neighborhood has a unique geography. Research suggests that crime and residents' perceptions of crime are strongly linked to this underlying geography.

Neighborhoods also have diverse characteristics in relation to crime, and consequently, solutions for one community may be different from those for another community. The connection between crime and geography, however, is often overlooked when implementing local Neighborhood Watch programs.

See "What Is Neighborhood Watch?"

Often the national program model is implemented in a neighborhood with little consideration given to local conditions. But if Neighborhood Watch programs are to be truly effective in preventing crime, the geography of each neighborhood must be examined and should inform an individualized program that addresses the specific elements of a community.

Neighborhoods serve as geographical frames of reference, encompassing the demographic, economic and ecologic characteristics of a particular place. The definition of a "neighborhood," however, relies heavily on perspective. Neighborhoods have different geographic scales that serve different purposes. For example, metropolitan governments often define a neighborhood as a very large area for planning, providing services or maintaining infrastructure. Business investors or visitors, on the other hand, see neighborhoods as smaller areas, extending several blocks in any direction from a central point. For residents, the neighborhood often extends only one or two blocks from their home.[2] For law enforcement, the neighborhood is part of the concept of "place," which is a factor in decisions about deploying resources and maintaining quality of life in a community.[3]

Members of a community frame their sense of neighborhood using geographic markers such as streets, buildings or natural land formations as boundaries. Consequently, their community-based efforts — centered on what is meaningful to them, such as health, housing, schools, jobs, services and crime — occur within those boundaries. This proximity connects community members to the same experiences — good or bad — according to Deborah Martin, assistant professor of geography at Clark University.[4] Researchers David Wilson and Dennis Grammenos at the University of Illinois, Urbana-Champaign, add that both geography and social interaction help form collective identity.[5]

In his seminal work on how people carve out territories (referred to as human territorial functioning), Ralph Taylor of Temple University provides a conceptual model that links the physical environment in which people live to a common understanding that cooperation fosters better results in community-based efforts. His model is place-dependent and is based on compact geographic areas.[6] A study funded by the National Institute of Justice and led by Taylor in Baltimore, demonstrated that people perceive common boundaries for their neighborhoods (that is, people define their environment using a common set of blocks, a larger area or a city) and have common perceptions of the quality of life and safety of the environment in these neighborhoods.[7]

The Neighborhood and Fear of Crime

To understand how geography relates to Neighborhood Watch programs, we must first understand why people's fear of crime matters. James Garofalo of the State University of New York at Albany defines fear as the emotional response to a sense of danger and anxiety about physical harm. Fear of crime, then, relates to the potential for such harm to be inflicted during a crime event.[8]

According to Garofalo, people tend to associate the threat of physical harm with certain places: where they live, a place they are visiting, somewhere they want to go, or a place they avoid. And although crime can happen anywhere, certain locations experience crime more frequently.[9] Generalizations about crime rates help establish the psychological link between the likelihood of a crime occurring in that place and a person's fear of being a crime victim.

Visual cues based on a place's geography also influence perceptions of how bad crime is — or is not — in a neighborhood. For example, areas with high rates of crime and deviant behavior tend to be densely populated, physically deteriorated places, with a substantial number of transients. In addition, residences are often mixed with less-than-desirable commercial establishments.[10] Residents who are able to move out of these areas usually do so, and people who live in "safe" neighborhoods generally avoid the high-crime areas because of fears they will be victimized. Visitors might be warned not to go into certain neighborhoods or might leave an area if they inadvertently wander into one that "looks bad." This also extends to how businesses view neighborhoods; possible victimization and potential loss of investment may influence whether business owners invest in certain areas.

Fear of crime, though, based on visual cues alone is not always substantiated.

Demographic factors such as education, income level and lifestyle further influence perceptions and fear. Thus, fear of crime changes across different neighborhoods. For this reason, the national Neighborhood Watch program model might not be an optimal strategy for all neighborhoods or blocks and may need to be modified to address the location's unique characteristics.[11]

Research has shown that blighted and deteriorated neighborhoods are associated with crime.[12] However, Neighborhood Watch programs often do not consider the link between the physical environment and crime, and consequently, the conditions associated with crime remain. If community members also work to improve and maintain the physical neighborhood, their programs might thwart more crime because visual cues of an improved neighborhood can send strong messages to both residents and outsiders about community involvement and concern.

For example, in an NIJ-funded study, Ralph Taylor and Adele Harrell explored the link between crime, fear of crime and the physical features on the street block and neighborhood level.[13] In their report, they discuss four physical features of settings where crimes occur and techniques for reducing vulnerability and crime in these settings.

Housing design features and block layout. Fear is often higher in locations that offer good refuge for a potential offender (for example, areas with tall shrubs, alcoves and blind corners) and little opportunity of escape for residents. Physical features that offer better surveillance, delineation between public and private space and proximity to well-used locations enable stronger control of spaces by law-abiding residents.

The researchers offered three approaches to reducing crime, crime vulnerability and the perception of crime in an area:

Land use and circulation patterns. The layouts of low-crime neighborhoods often have more one-way, narrow and low-volume streets, which make entry more difficult. Conversely, high-crime neighborhoods tend to be laid out in a way that provides easier access. In some cities, the percentage of lots zoned for commercial use can be a significant predictor of high robbery rates. Taylor and Harrell report in their study that changing the pattern of how neighborhood space is used can reduce contact between potential offenders and their targets and abate crime. This includes giving careful attention to walkways, paths, streets, traffic patterns, and the location and hours of operation of public spaces and facilities.

Resident-generated territorial signage. This involves promoting increased neighborhood markings and signs by local residents to influence perceptions of crime — the very core of the Neighborhood Watch program.[14] The hope is that if residents increase the number of signposts in their neighborhood, it will be apparent to others (including potential offenders) that residents are involved in the community, vigilant about what happens on the street and willing to intervene if needed. This, in turn, reduces the perception of crime and vulnerability of an area.

Controlling physical deterioration and disorder. Controlling the physical deterioration in a neighborhood by limiting graffiti, trash accumulation and other signs of distress in public areas and on personal property can influence a potential offender's perception of an area's vulnerability to crime. It can also influence residents' fear of crime.[15]

Does the Condition of Signs Matter?

If we know that markings and signs put up by local residents can influence people's perceptions of vulnerability and crime, the next question is: Does the type or physical appearance of the sign play a role in those perceptions?

P. Wesley Schultz and J.J. Tabanico used students in a laboratory setting to test the effect of the condition of Neighborhood Watch signs and the words on the signs.[16] They found that the students' perceptions about safety were more affected by the neighborhood's socioeconomic status than by the words on or the condition of the signs. For example, communities with low SES were perceived to be less safe and have higher levels of crime no matter what the sign said and regardless of its condition (new, defaced or aged). Other interesting findings from the study include:

The students' perspectives suggest that visual cues of the physical environment — including the type and condition of Neighborhood Watch signs — send messages about the level of crime in a neighborhood, regardless of who lives there. These visual signals (ecological characteristics), combined with knowledge about the neighborhood's residents (demographic) and the presence or lack of businesses (economic), shape people's perceptions about the safety of an area.

Geography Is the Starting Point

One primary theme is clear in all the research regarding neighborhoods and crime: Geography affects how people, residents and potential offenders alike view a neighborhood. Because both the nature and the degree of the problems communities face vary, programs like Neighborhood Watch must therefore take into account the full range of community characteristics in order to implement a successful approach to crime prevention.

To do this, smaller geographic frameworks are needed to work within and between neighborhoods. However, the larger the area, the more difficult it is to get participation and cooperation from those in a community. Residents should enact crime prevention measures that complement existing program elements such as block watches or other local meetings that aim to involve residents in community betterment. Crime ebbs and flows in neighborhoods, and when crime rates drop, residents often lose interest — and with it momentum — in maintaining crime prevention efforts. The marriage of crime prevention programs like Neighborhood Watch with other community initiatives helps to ensure long-term success.

[note 4] Martin, D.G., "'Place Framing' as Place-Making: Constituting a Neighborhood for Organization and Activism," Annals of the Association of American Geographers 93 (3) (September 2003): 730-750.

[note 12] For example, Shaw, C., and H. McKay, Juvenile Delinquency and Urban Areas: A Study of Delinquents in Relation to Differential Characteristics of Local Communities, Chicago: University of Chicago Press, 1942.

[note 15] Discussion of controlling physical deterioration and disorder within a neighborhood as a means of preventing crime derives from George Kelling and James Wilson's "Broken Windows" theory, which holds that problems should be fixed while they are small, before they escalate into something larger and more problematic. Wilson, J.Q., and G.L. Kelling, "Broken Windows", Atlantic (March 1982). This concept is explored further by Pamela Wilcox and her colleagues. Their analysis indicated that the built environment (public land use specifically), along with certain social characteristics, influences crime risk perception and that this perception varies greatly across neighborhoods. Wilcox, P., N. Quisenberry, and S. Jones, "The Built Environment and Community Crime Risk Interpretation," Journal of Research in Crime and Delinquency 40 (3) (2003): 322-345.

Ronald Wilson is the program manager for the Mapping and Analysis for Public Safety program at the National Institute of Justice. He is responsible for developing the program's research and technical agenda, particularly with respect to the integration of the theories and principles of geography into the study of crime and the technology used to track it. Wilson's professional background is in the physical, social and computing sciences.

Timothy Brown, a consultant with Booz Allen Hamilton, is a research associate for the MAPS program at the National Institute of Justice. He supports work on the Geography and Public Safety Bulletin, along with various intramural research efforts involving geography and crime. Brown holds a degree in geography from Virginia Polytechnic Institute and State University.

Beth Schuster is a freelance writer and editor and former managing editor of the NIJ Journal.