In 2011, we awarded grants to the Wayne County (Detroit), Michigan, Prosecutor's Office and to the Houston Police Department to look at the issue of sexual assault kits (SAKs) that had not previously been sent to a crime laboratory for DNA testing. The goal of the projects was to identify effective, sustainable responses regarding unsubmitted SAKs. The brochures listed on this page are derived from lessons learned from these projects.

Performing an Audit of Sexual Assault Evidence in Police Custody 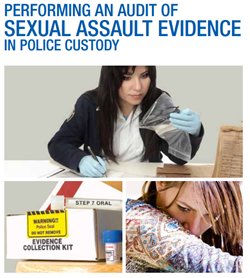 When jurisdictions address the issue of sexual assault evidence that has not been submitted to a crime lab for testing, the first step is to determine how many unsubmitted SAKs there are. In jurisdictions that do not have robust evidence-tracking systems, this might require officials to conduct an audit, or census, of the SAKs in police custody. This brochure provides guidance based on lessons learned in Detroit about how to conduct an audit of all SAKs to determine which have and have not been tested. 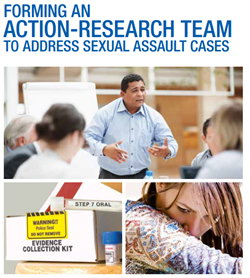 As part of the NIJ-funded action-research project in Wayne County (Detroit), Michigan, the Prosecutor’s Office formed multidisciplinary team to address the issue of unsubmitted SAKs. The team included practitioners who dealt with sexual assaults every day — police officers, crime lab analysts, prosecutors and victim advocates — and social science researchers. This brochure offers guidance based on Detroit’s experience for forming a multidisciplinary team to conduct action research on a large number of unsubmitted SAKs.

In jurisdictions that have determined that they have many SAKs in police custody that have never been sent to a crime lab for testing, officials must determine whether, and how, to test that evidence. Testing a large number of SAKs from older cases at one time brings a number of challenges. This brochure provides guidance based on lessons learned in Detroit to help other jurisdictions develop a testing plan. 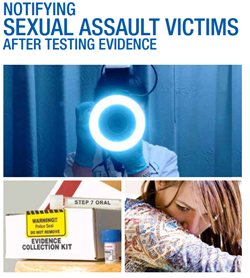 Testing SAKs in older cases can raise complex legal and psychological issues for the victims. Using a victim-centered and trauma-informed approach for notifying victims about the status of their sexual assault cases may help minimize trauma. This brochure provides guidance based on lessons learned in Detroit and Houston about how best to notify victims in situations where previously unsubmitted SAKs in older cases are now being tested. These lessons might also be useful in the investigation and prosecution of current cases.

Interested in learning more about unsubmitted sexual assault kits? Wondering how many SAKs are in police evidence rooms? Which have and haven’t been submitted to crime labs for testing — and why? How to reach out to victims with new information after testing older kits? Visit our Sexual Assault Kits site to learn more about how science can improve the effectiveness of our nation’s response to sexual assault.