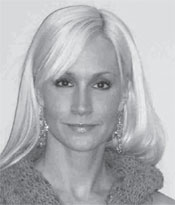 The Peter P. Lejins Research Award is the highest honor bestowed upon a corrections researcher. "The Lejins Award is given to an individual who has produced significant research for the correctional community and has demonstrated personal commitment and contribution to improve the profession of corrections," explained James Gondles, Executive Director of the American Corrections Association, which bestows the award.

Kristen M. Zgoba received her first NIJ research grant in 2006, just two years after earning her doctorate from Rutgers University. With the grant, she established prevalence rates of sex offenses before and after Megan's Law and compared recidivism rates among sex offenders who were subject to the law with rates for those who were not. This seminal work has become a benchmark for future research in the field. Read more about the study (pdf, 4 pages).

Since that first NIJ award, Zgoba has contributed an impressive body of knowledge about sex offenses and offenders, including characteristics of sex offenders, predictive validity of risk assessment tools (such as the Static-99R), recidivism trajectories, and collateral consequences of sex offender notification and residency restriction laws.

Zgoba is currently supervisor of research and evaluation at the New Jersey Department of Corrections, where she focuses on sex offender management, offender recidivism and correctional health care, among other things. She developed a five-year research initiative and grant framework for her department and served as the statistical liaison for the "Another [Second] Chance" Initiative under former Governor Corzine's Crime Plan. She also is an adjunct professor at Rutgers.

"Her skills are top-notch, her grasp of the importance and uses of research in practical ways is unsurpassed, and her contributions are some of the most important in corrections departments in the nation," said Richard Tewksbury, 2006 recipient of the Lejins Award. "Dr. Zgoba has earned this distinction."