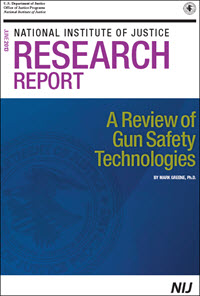 Since the mid-1990s, numerous teams have developed firearms with advanced gun safety technology to varying degrees of maturity. These firearms are designed to contain authorization systems that generally combine an authentication mechanism that actuates a blocking mechanism in a seamless process that is designed to take less time than handling and firing a conventional gun.

A Review of Gun Safety Technologies does not endorse any particular technology, developer, patent, company or approach. At the time the report was published, personalized firearms were not commercially available in the United States, but at least three products - two handguns and a shotgun - were at a technology maturity level that can at least be described as commercializable or pre-production.

The report responds to an executive action issued by the President on January 26, 2013. He directed the Attorney General to issue a report on the availability and most effective use of new gun safety technologies and challenge the private sector to develop innovative technologies.