Get to Know a LEADS Scholar — Q&A with Deputy Chief Christopher W. Ortiz 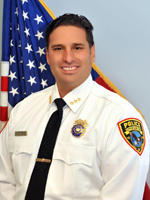 A current LEADS Scholar from a smaller police agency, Deputy Chief Ortiz said his interest in policing research emerged when he was a criminal justice major at John Jay College in New York. After graduation, he chose policing over law, starting as a patrol officer in New York City. A fluke of scheduling opened the door to a research career, he recalled. When his department moved Ortiz to a three-days-on/four-days-off schedule, he found he had more time “than I knew what to do with.” He applied for and was accepted as a scholar-in-residence at the Police Foundation in Washington, D.C., where he would spend four days each week. That experience, he recalled, “created that fire inside of me for research.” The benefit flowed both ways: law enforcement scholars like Ortiz learned research techniques such as interviewing and working with focus groups, and the Foundation secured better entrée to police agencies by building rapport and a shared lexicon with working law enforcement professionals.

Ortiz’s initial research interest on the job was measuring community satisfaction with police. Over the years, he has researched a number of subjects through multiple collaborations with research organizations, always receiving essential support from department leaders, especially the Glen Cove chief, he noted. Ortiz said that often his evidence-based research results helped build the case for his department’s program funding requests to municipal agencies.

This research, and continued study, also earned Ortiz a Ph.D. in criminal justice from John Jay College of Criminal Justice in New York. As deputy chief of the Glen Cove police force, Ortiz oversees multiple operations that include grant procurement, patrol operations, investigation and data analysis, and policy. As his job expanded, Ortiz recalled, he found he had less time to engage in research. When he heard of the LEADS Scholars program, he saw it as an opportunity to rekindle that interest and help his department build its commitment to evidence-based policing.

NIJ.gov:How did you learn of the LEADS Scholars program and what motivated you to apply?

Chris Ortiz: I saw in a bio of another John Jay grad, Jeremiah Johnson, that he became a LEADS Scholar. He’s another cop with a Ph.D., and that’s not a usual thing — although you’re seeing it more now. I thought, “Oh, wow.” I looked up the [LEADS] program and thought, “This sounds extremely interesting and like something I should try.” So I applied on my own, and their response only took three months or so. It’s a quick turnaround.

Chris Ortiz: The two takeaways I got from the online description [of the LEADS Scholars program] were that you attended the International Association of Chiefs of Police annual meeting, and then there was a summer meeting at NIJ that coincided with the George Mason [University Center for Evidence-Based Policing] program. And I said, “All right, it’s two meetings a year. It doesn’t seem like that’s exhausting.”

But in reality, it’s much more than that. It’s a program that reinvigorated me in a sense. Very early on I had begun this course of research, and I was now wrapping it up. I’d worked for every outfit out there doing research all across the country, and then, as I was promoted, I took on more responsibilities within my own agency, to the point where now I’d become deputy chief and I’d distanced myself from the research world. And LEADS really brought me back full swing.

And it opened my eyes to look at data that I had been collecting on use of force — I had created policy and practice within my own agency to collect the data, but I just never had the wherewithal to sit down and analyze it, and this program gave me that gumption to go and do it.

NIJ.gov: Do you have any current police projects that reflect your NIJ experience?

Chris Ortiz: My chief and I are looking at de-escalation of force. How can we build that into training and how can we make our training relevant to teaching our officers these de-escalation skills? We always say the biggest weapon a police officer has out there is the ability to communicate. Without that, you have nothing. If you have to use force, it’s almost a failure of communication. So in 2016, I created a policy on de-escalation. We utilized national models from NIJ as well as other organizations to model the policy. The de-escalation training has included three components: lecture, firearms use, and mental health crisis training. I trained the force in a week. With that, I sent our firearms trainers to a scenario-based “training the trainer” on de-escalation.

NIJ.gov: Is the risk of use of force greater when an officer is responding to a mental health crisis?

Chris Ortiz: Yes, and our data showed that our use-of-force incidence when dealing with mentally disabled people had been around eight or 10 percent. But after the de-escalation training, that figure appears to be down, around three to four percent. I’m working now with NYU to see if this is an artifact or if it’s real. I suspect it’s real.

NIJ.gov: It’s been observed that the police world and the research world have been worlds apart. LEADS was developed in part to build a bridge between the academy and policing, to help law enforcement benefit from evidence-based policing research. What has been your experience in that regard, as a police officer committed to applied research?

Chris Ortiz: It played out in my career trajectory. Early on the Police Foundation realized that we need sworn officers that have legitimacy and trust to help gain entrée to these police departments. I was given a fellowship there, and later Rob Davis of the Vera Institute of Justice had the same idea. [Robert C. Davis, currently chief social scientist, Police Foundation.] And he said, “You know what, I’m going to hire a police officer as my research assistant.”

So we would go to discuss research with police officers, and the first thing I said was, “Hey, I’m a police officer in New York.” We’d make immediate contact, and it would break down some of the barriers. It’s major bridge building.

NIJ.gov: Have you seen generational differences in terms of the receptivity of officers to research and evidence-based policing?

Chris Ortiz: Yes. When I was applying my research in the department, with older officers there could be more skepticism. So I wouldn’t parade around saying, “Hey guys, I just did this study and here’s what we should be doing.” I would try to initiate it more quietly.

The new generation — they’re often coming to the job with a broader perspective and a bigger appreciation for the benefits of the job — doing something that’s noteworthy and meaningful. They much more easily get onboard in terms of the research. We educate people differently now. It’s about the “Why’s,” and not “Just do it.”

You need the “Why.” That’s a very important question. It helps you believe in what you’re doing. And it resonates for me, too, on our policing policy. Why are we here? What are we doing? What is the point of our police agency?

We want our community to experience safety as well as satisfaction with our services. We want them to be happy. So sometimes the things that we do aren’t necessarily targeting a crime problem. Those things may be there just because they make people feel better about their communities, and about the police.

[note 1] Assistant Chief Victorian’s answers in the Q&A section have been edited for length.