Gangs vs. Extremists: Solutions for Gangs May Not Work Against Extremism

Can the wealth of existing research on criminal gang members point to better solutions to violent extremism in the United States? A study finds only limited parallels.
Date Published
October 26, 2020

Much is known about the workings of criminal gangs and traits of gang members, and much of that knowledge has informed community-focused anti-gang programs. It was long hoped that what works against gangs could also help build community resilience to the emergence of homegrown violent extremists, but recent research suggests that gang members and domestic extremists have too few traits in common for gang programs to translate. The few observed similarities that could point to the possibility of common programmatic solutions are tenuous at best.

A study by a prominent terrorism research center found key distinguishing factors between gangs and domestic extremists, such as average age and marital status, commitment to religious faith, and vulnerability to financial strains versus vulnerability to threats to cultural identity. The University of Maryland’s National Consortium for the Study of Terrorism and Responses to Terrorism (START) empirically analyzed both the quantitative demographic traits of gang members and domestic extremists and certain qualitative differences between the groups. The qualitative study element examined distinguishing factors such as comparative strength of community and family connections and level of reliance on social media.

The research, sponsored by the National Institute of Justice (NIJ), yielded clear policy implications, according to the research report submitted to NIJ. The quantitative component of the work found:

The qualitative study component yielded key findings that the researchers deemed to be in harmony with the quantitative work highlighting how the two groups differ. The START researchers also identified several factors within individuals and communities that are conducive to resilience to participation in both gangs and extremist groups. Those factors included:

The researchers further concluded that tailoring preventive, community-based programming to local circumstances is crucial, “as cut-and-paste efforts could be perceived by communities as insensitive and potentially detrimental toward providing beneficial relationships.”

The START study was an empirical assessment of:

The four subject samples were:

Researchers drew the quantitative dataset of extremists from the Profiles of Individual Radicalization in the United States (PIRUS), developed with NIJ support.[1] At the time of analysis, PIRUS included individual-level data from 1,473 observed cases of U.S.-based extremism. PIRUS drew data exclusively from open sources such as news media reports, court records, and published biographies.

Qualitative data on extremists were drawn from a PIRUS subset of individuals radicalized to the point of committing violent or nonviolent illegal acts in the United States between 1960 and 2013.

For the quantitative study of gang members, researchers drew data from the National Longitudinal Survey of Youth 1997, one of the largest publicly available sources of data on gang members. The research team obtained qualitative data on gangs through interviews with 45 current and former gang members in Los Angeles, Phoenix, and Denver.

The START team found limited group similarities that suggested a potential for applying gang program models to extremist groups, but cautioned that the connection is tenuous and more work is needed to confirm an overlap. The similarities related to:

However, the research report stressed that “these parallels are largely speculative despite some attempts to examine the overlap.”

With respect to marital status, extremists were far more likely to be married than gang members generally, a finding related to the large age difference between the two groups.

Other contrasting traits of extremists and gang members are presented in ( exhibit 1). 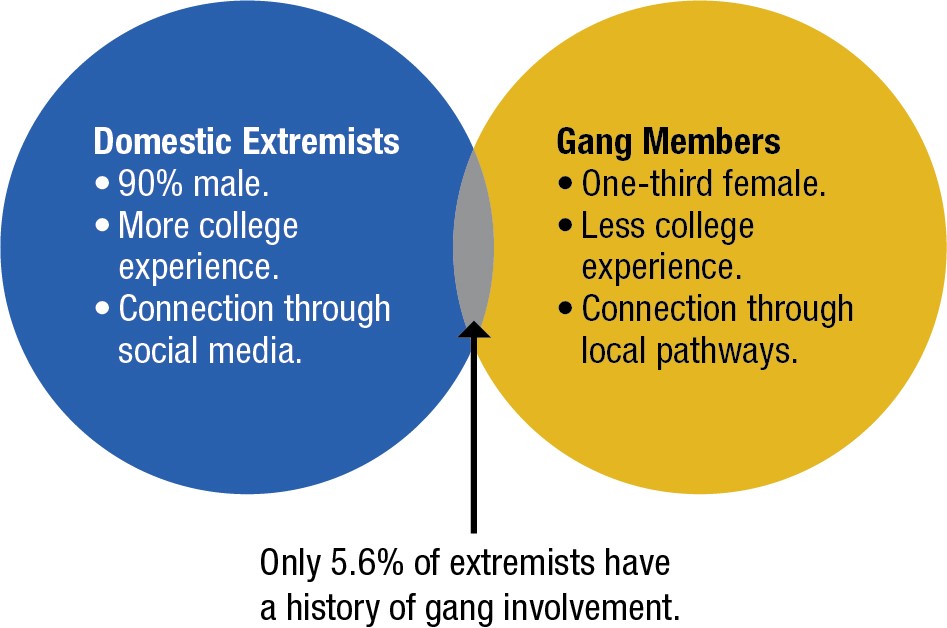 Note: The examples in this exhibit are a partial list of those traits discussed in Gary LaFree, “A Comparative Study of Violent Extremism and Gangs,” Final report to the National Institute of Justice, grant number 2014-ZA-BX-0002, August 2019, NCJ 253463.

The research described in this article was funded by NIJ award 2014-ZA-BX-0002, awarded to the National Consortium for the Study of Terrorism and Responses to Terrorism (START), University of Maryland. The article is based on the report “A Comparative Study of Violent Extremism and Gangs” (2019) by Gary LaFree.

[note 1]National Consortium for the Study of Terrorism and Responses to Terrorism [START], “Profiles of Individual Radicalization in the United States (PIRUS),” START,.

National Institute of Justice, "Gangs vs. Extremists: Solutions for Gangs May Not Work Against Extremism ," October 26, 2020, nij.ojp.gov:
https://nij.ojp.gov/topics/articles/gangs-vs-extremists-solutions-gangs-may-not-work-against-extremism