CeaseFire: A Public Health Approach to Reduce Shootings and Killings 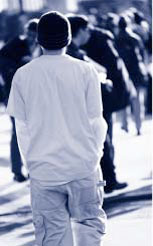 The bloodshed in some of the Windy City's toughest neighborhoods declined substantially with the advent of the CeaseFire violence reduction program.

A rigorous evaluation of the program, sponsored by the National Institute of Justice, confirmed anecdotal evidence that had already led officials in other cities to adopt Chicago's CeaseFire model. Researchers found that CeaseFire had a significant positive impact on many of the neighborhoods in which the program was implemented, including a decline of 16 to 28 percent in the number of shootings in four of the seven sites studied.

"Overall, the program areas grew noticeably safer in six of the seven sites, and we concluded that there was evidence that decreases in the size and intensity of shooting hot spots were linked to the introduction of CeaseFire in four of those areas. In two other areas shooting hot spots waned, but evidence that this decline could be linked to CeaseFire was inconclusive," the researchers reported.

Led by Wesley Skogan, a political science professor at Northwestern University, the evaluation team meticulously measured CeaseFire's impact on shootings and killings in Chicago.[1] The researchers spent three years evaluating the program. The findings are encouraging.

CeaseFire uses prevention, intervention and community-mobilization strategies to reduce shootings and killings. The program was launched in Chicago in 1999 by the Chicago Project for Violence Prevention at the University of Illinois at Chicago School of Public Health. By 2004, 25 CeaseFire sites existed in Chicago and a few other Illinois cities. Some of the program's strategies were adapted from the public health field, which has had notable success in changing dangerous behaviors. For example, public health campaigns have helped to decrease smoking and increase childhood immunizations. In fact, the program's executive director, Gary Slutkin, is an epidemiologist who views shootings as a public health issue.

As the researchers note in their report, a significant amount of street violence is "surprisingly casual in character." Men shoot one another in disputes over women, or because they feel they have been "dissed." Simply driving through rival gang territory can be fatal. In the gang world, one shooting can lead to another, starting a cycle of violence that can send neighborhoods careening.

In their evaluation, the researchers detail the program's approaches to building collaborations in the CeaseFire sites. The successes and pitfalls were many, as could be expected in a complex program that required law enforcement agencies, businesses, service providers, schools, community groups, political leaders and one of CeaseFire's most important partners, churches, to work together.

Of all of the program's facets, the most notable involves hiring "violence interrupters."

See "Who Are the Violence Interrupters?"

CeaseFire's violence interrupters establish a rapport with gang leaders and other at-risk youth, just as outreach workers in a public health campaign contact a target community. Working alone or in pairs, the violence interrupters cruise the streets at night, mediating conflicts between gangs. After a shooting, they immediately offer nonviolent alternatives to gang leaders and a shooting victim's friends and relatives to try to interrupt the cycle of retaliatory violence. Violence interrupters differ from community organizers or social workers. Many are former gang members who have served time in prison, which gives them greater credibility among current gang members.

CeaseFire's message travels from violence interrupters to gang members, from clergy to parishioners, and from community leaders to the neighborhood through conversations, sermons, marches and prayer vigils. The message appears on banners at postshooting rallies, which are a major part of the program. The message is simple: "The killing must stop!"

In the process evaluation, the researchers looked at how the program worked in the field. They interviewed CeaseFire staff, police, social service workers, and business, religious and community leaders at 17 sites. The researchers also interviewed 297 gang members and street youth to get their assessment of the program.

The evaluation of outcomes was challenging because the researchers had to find comparable areas without the program to make valid comparisons to CeaseFire neighborhoods. They found seven such sites within the city of Chicago.

Statistical analysis: Analysis based on 17 years of data showed that, as a direct result of CeaseFire, shootings decreased 16-28 percent in four of the seven sites studied. The researchers called this decrease in gun violence "immediate and permanent" in three of the sites and "gradual and permanent" in the fourth site.

Gang social network analysis: Gang killings declined in two CeaseFire sites. The researchers also looked at the proportion of gang homicides that were sparked by an earlier shooting. This violence was a special focus of the violence interrupters. In four sites, retaliatory killings decreased more than in the comparison areas.

Many clients said in interviews that they had received significant help from CeaseFire. More than three-fourths of the clients said they needed a job; 87 percent of that group received significant help. Of the 37 percent who said they wanted to get back into school or a GED program, 85 percent said they had received help through the program. Nearly every one of the 34 percent who told the researchers that they wanted help in leaving a gang reported that they had received such guidance. However, although two-thirds of the clients became active in CeaseFire after they had formed a relationship with a violence interrupter — and indeed, half of them took part in marches and vigils after a shooting occurred in their neighborhood — 70 percent of the clients were still in a gang when they were interviewed.

That said, the researchers found that CeaseFire had a positive influence on these at-risk youth.

"A striking finding was how important CeaseFire loomed in their lives," the researchers stated in the report. "Clients noted the importance of being able to reach their outreach worker at critical moments — when they were tempted to resume taking drugs, were involved in illegal activities, or when they felt that violence was imminent."

CeaseFire also had a positive influence on the violence interrupters themselves. The program employed 150, many of whom had been in a gang and served time in prison. CeaseFire gave them a job in an environment where persons convicted of crime who have completed any court-ordered punishment have limited opportunities and, the researchers note, "Working for CeaseFire also offered them an opportunity for personal redemption and a positive role to play in the communities where many had once been active in gangs."

Evaluating Chicago CeaseFire was not a neat laboratory experiment. Because the program runs in the real world, boundaries were not always clear between CeaseFire neighborhoods and other neighborhoods. For example, the violence interrupters had to go where gang members and others with the potential to commit gun crime (and their potential victims) lived or hung out. "Spillover" between targeted areas and other areas was inevitable, although the researchers pointed out that this could have resulted in underestimating the program's impact.

Other programs, such as Project Safe Neighborhoods, were running in and around some of the CeaseFire sites during part of the time the researchers evaluated the program. Despite their best efforts to avoid such areas when selecting comparison sites, it was not always possible to do so. When this occurred, the researchers stated they were unable to determine empirically that CeaseFire alone was responsible for the decrease in violence.

Other issues made it difficult to discover the exact effect of CeaseFire in as straightforward and precise a way as policymakers and citizens might like. For example, in looking at the statistical data about violence, the researchers had to pick a month as the pre- and post-CeaseFire demarcation. However, pinpointing a precise date for the start of a program as large and multifaceted as CeaseFire is not easy. Community-mobilization and public education efforts got under way at different times in different areas, and the hiring of violence interrupters came a few years after the program started.

Another issue to consider when looking at the findings is that the researchers were able to examine only events that were reported to and recorded by police.

Finally, one overarching caveat to keep in mind is that Chicago experienced a huge drop in violence beginning in 1992.[2] As the researchers state in their report, "The reasons for this decline are, as elsewhere in the nation, ill-understood, and we could not account for possible remaining differences between the target and comparison areas in terms of those obviously important factors."

Despite these caveats, the evaluation showed that the program made neighborhoods safer. CeaseFire decreased shootings and killings (including retaliatory murders in some of the sites), making shooting hot spots cooler and helping the highest-risk youth.

The full report contains an extensive discussion of many topics, including:

Like other criminal justice programs, CeaseFire was vulnerable to the vagaries of funding fluctuations. Policymakers in particular will want to read sections of the evaluation to understand how the program was funded and the role that fluctuations played throughout the years. Also, CeaseFire was a small-scale program. Although it varied among the sites, the typical CeaseFire site's annual budget during the period covered in the evaluation was about $240,000. In the summer of 2007, the program was dramatically downsized because of budget cuts. The researchers found that they did not have enough data to do a rigorous statistical analysis of this cutback’s impact. They did state, however, that "[a] detailed examination of the existing data did not reveal any dramatic shifts in crime following the closures [of CeaseFire sites], when compared to trends in the comparison areas."

CeaseFire is still running in 16 Chicago communities and six other Illinois cities. The CeaseFire model is going national. Recently, CeaseFire has collaborated with the Baltimore City Health Department to set up the model in four sites. Parts of the model are being implemented in Kansas City, Mo., and officials are considering implementing it in Columbus, Ohio; Detroit; Jacksonville, Fla.; and New Orleans. Other programs modeled on CeaseFire are being launched in eight New York cities, including Albany, Buffalo, New York City, Rochester and Syracuse.

The NIJ evaluation was supported by the Bureau of Justice Assistance and the Office of Juvenile Justice and Delinquency Prevention.

Read an executive summary and the full report are available (pdf, 238 pages)

[note 1] Skogan was the lead investigator on the NIJ-funded evaluation. Other researchers who participated in the evaluation include So Yung Kim (Korea Advanced Institute of Science and Technology); Richard Block (Loyola University Chicago); Andrew Papachristos (University of Massachusetts Amherst); and Susan Hartnett and Jill DuBois (Northwestern University).

[note 2] Crime and violence decreased throughout Chicago in both the target and the comparison sites during the time that the researchers considered data, so they used fairly complex analyses to examine whether crime dropped significantly, hot spots visibly moved or cooled, and gang homicide weakened more in the CeaseFire sites than in the comparison areas.

Nancy Ritter is a writer with the National Institute of Justice. She is a former editor of the NIJ Journal.