Winnie Reed: More Than 40 Years of Contributions to NIJ 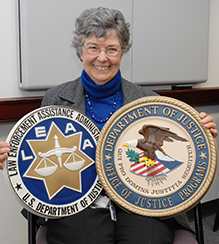 In December, Winnie Reed retired after nearly 42 years with NIJ. We asked her to look back — from her first job right out of graduate school in the summer of 1972 to the last two-plus years as Director of the Crime, Violence and Victimization Research Division in NIJ's Office of Research and Evaluation.

NIJ: What was your first job at NIJ?

Winnie Reed (WR): Actually, it was called the National Institute of Law Enforcement and Criminal Justice back then, and my first job was writing abstracts for awarded grants. There weren't many people trained as criminologists or people with criminal justice degrees at that time. I was hired because I had a master's degree in international relations, but when I walked in the door, I really knew nothing about crime and criminal justice. I think I had just read one book! So, I started reading everything I could get my hands on.

NIJ: What motivated you to take the job?

WR: I wanted to use my degree, of course, but mainly, I was interested in public service and trying to make a difference. Plus, when I came for my interview, I found it to be a very homey place. I thought there was a good atmosphere.

NIJ: What kinds of changes have you seen in criminal justice over the past four decades?

WR: Where do I start? Certainly, one of the biggest changes has to do with technology — with maybe the biggest being DNA and its use in solving crimes. But there are others, like surveillance technology, both in corrections and in city centers, such as in parking lots and shopping malls. Another significant change is that crime has dropped since the mid-1990s. And I also have to mention the victims movement, which has been very important in influencing the way the entire criminal justice system responds to violence against women, especially intimate partner violence.

NIJ: You have mentioned that some of your most meaningful work has been in the field of evaluation — what do you regard as especially significant about evaluations?

WR: To me, it's essentially about the fact that the government is spending money on programs, and it makes sense to understand how the programs work or don't work. Years ago, people seemed to look at "evaluation" as just being a "thumbs up" or "thumbs down." People didn't focus on possibility of improvement — and I guess I always thought, "Why wouldn't you want to improve?"

NIJ: Have you seen a shift in attitude about evaluations between then and now?

WR: Most definitely. Back then, I think there were some who wanted to avoid evaluation — or at least not have an independent evaluation. Now, of course, there is much more emphasis on evidence, and being subject to an evaluation is much more of a standard practice.

NIJ: Can you give an example of one evaluation you were involved in?

WR: I worked on the first evaluation of G.R.E.A.T. — Gang Resistance Education And Training — which is a gang prevention program delivered in the classroom, mostly to middle-school students by law enforcement. NIJ's longitudinal study of G.R.E.A.T. found that, at the two-year follow-up, there was no difference between kids in the experimental group and kids in the control group. At that time, the Director of the Bureau of Alcohol, Tobacco, Firearms and Explosives (ATF), which ran G.R.E.A.T., said, "Well, if it's not working, I want to improve it," so he supported a study group. NIJ brought researchers and practitioners together to make recommendations on ways to improve the program, and the ATF revised the entire curriculum, trained law enforcement officers on the new curriculum and fielded it. Now NIJ is just finishing a second evaluation. [Ed. note: The results of this evaluation will be released soon.]

NIJ: What, particularly, excites you about this?

WR: Well, I think that this is a good example of the best thing that really can happen with an evaluation: that the results are used in practice and make a difference in terms of policy.

NIJ: Speaking of policy, what kinds of things, generally, have you been involved in over the years?

WR: When new bills are written on the Hill, they may be sent by Department of Justice officials to NIJ for comment. For example, I responded to proposed anti-gang legislation frequently and was involved in implementing some of the work on the major Crime Act bill in the 1990s, which brought a lot of policing research work to NIJ.

NIJ: What would you say were the major factors that kept you at NIJ for so long?

WR: One thing was that, for the most part, I had very good supervisors. Two I would mention are Richard Barnes and Richard Linster — the two Richards — both of whom were very intelligent and just had a good sense of how to work with people. I learned a lot from them.

NIJ: In the "olden days," you were able to go out into the field much more than federal workers do now — can you describe some of the ways that impacted your work?

WR: [Laughing.] Well, it makes a huge difference. You are much more involved in the project, say, sitting in with researchers when they are developing their survey instruments — and that can be very important, of course. Also, in terms of managing taxpayer dollars, I think I had a better, more sensitive understanding of what it took to implement a research project ... what some of the pitfalls were and what to look for. When I was working on an evaluation, being able to observe a program and speak with those involved, even for a short time, gave me a deeper and wider understanding of the program. Of course, it's also important to have a strong relationship with our research partners when NIJ is answering questions from the Hill or the press; you can just be so much more responsive than if you only know about a project from reading reports or emails or talking to people on the phone.

NIJ: What do you think are NIJ's greatest challenges over the next few years?

WR: Getting better data! Our Uniform Crime Reporting data leaves out a lot of information. Also, the National Crime Victimization Survey is, at present, a national sample, which means that localities basically have to do their own surveys to understand their crime, what their hot spots are. We do have some data, of course, but it's just not as good or thorough as it could be.

NIJ: Why should taxpayers care about that?

WR: If you think of different kinds of cybercrime or white-collar crime, for example, there are not very good data on the types of crime, let alone how extensive they are across the country. There is some surveillance information on intimate partner violence and sexual violence being developed now by the Centers for Disease Control and Prevention, but before, we never had good information. We don't even have very good information on the gang situation in our country. The National Gang Center collects data from law enforcement, but it's variable in terms of how agencies collect it and how often they purge it. For example, do they go back and look at an individual and say, "Well, this person is no longer a gang member, so we're going to take him out of our database"? Basically, if you don't even know the extent of the problem, how are you going to know how to respond to it?

NIJ: What other major criminal justice challenges do you think we face?

NIJ: What are some of your hopes for NIJ's future?

WR: You know, NIJ's mandate is so broad that I think, historically, we've had a problem saying no to a particular topic area. But I do hope that NIJ is able to develop a fuller range of research projects in white-collar crime and cybercrime. One area where we do now have a really strong portfolio is elder abuse, but I remember being shocked when I first learned that the National Institute on Aging didn't do much research in that area. So NIJ has developed this portfolio, and I hope that will continue.

NIJ: What one or two projects stand out in your mind over the years?

WR: I think our police officer fatigue and shift-length studies have been very useful to law enforcement agencies. And certainly another big area has been our tribal, Indian Country research, which I worked on for 10 years or so.

NIJ: Looking back, is there anything you would have done differently?

WR: I did wonder if I might have done things in reverse order, early on. I mean, why wasn't I a police officer or a probation officer first? I could have gone back to school and gotten a Ph.D. and taught, but it never really worked for me to do that, logistically. So I stayed here — and I must say that this job has never been dull. It's always been challenging, and that makes a huge difference. That, plus the opportunity to make a difference, is very important.

NIJ: What are you going to miss most about the work?

WR: Beyond the people, I would say the substance. Whatever the subject area, the idea has been improvement, and I think that's a good thing: Help people in the field stop doing things that aren't useful and start doing things that are. It makes life better for everybody.

Nancy Ritter is a writer and editor at NIJ.