Get to Know a LEADS Scholar — Q&A with Assistant Chief Sheryl D. Victorian 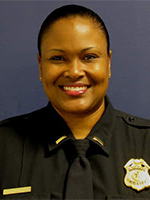 A 2015 LEADS Scholar who completed her term in 2018, Assistant Chief Victorian is responsible for the Houston Police Department’s Patrol Region 2 Command, managing five patrol divisions as well as the department’s vehicular crimes division. A former patrol officer with nearly three decades on the job, Victorian is responsible for more than 600 officers and civilians. While rising through the ranks, she earned a Ph.D. in administration of justice. Her primary interests are police-community relations, police leadership, and police ethics. Victorian was promoted to assistant chief of police in October 2017.

Victorian said that in recent years she has seen a change in philosophy within the Houston Police Department with respect to the value of evidence-based practice and policy research.  The department has made progress in encouraging research, authorizing research projects, and sharing police data for research use. In February 2018, Assistant Chief Victorian was appointed to the police department’s research advisory committee.

Victorian has been part of a LEADS Scholars group working to identify and advance the interests of women in policing.

NIJ.gov: Why did you apply to the LEADS Scholars program?

Sheryl Victorian: My former dissertation chair forwarded an NIJ email about LEADS to me and said, “Hey, this might be something you’d want to look into.” As I read the requirements and what it [LEADS] was about, I thought, “You know what, I’m going to apply for this.” So I applied and I was accepted. It sounded like an opportunity to learn how to apply my academic accomplishments in the field, and I was attracted to that.

Sheryl Victorian: Initially, I didn’t know what to expect. I knew that they were sponsoring us to go to the IACP [International Association of Chiefs of Police] annual meeting, that we’d have meetings and roundtables with NIJ professionals. I knew that I’d be surrounded by a group of my peers who also were interested in applied research and have participated in research. And that I would be exposed to an opportunity that was unique and that could open doors for me. That’s all I knew.

But LEADS has exceeded my expectations. It has allowed me to develop as a law enforcement professional, based on what I was exposed to during my three years in the program. I’m absolutely certain that my experience in the program and my exposure played a role in my being promoted three times between 2015 and 2018.

It is a networking opportunity with colleagues from across the United States from different-sized agencies who may be experiencing different issues. Colleagues who work for agencies that may have policies we’re trying to develop or that have responses to challenges we may face in developing a specific policy. I looked at this as an opportunity to make connections with like-minded police professionals I could ask advice from or give advice to, or ask to share best practices. That was invaluable to me.

I also enjoyed meeting and getting to know NIJ mentors, who continuously guide LEADS Scholars and create professional development opportunities. Their leadership and knowledge in the field connected us to resources we may not have otherwise been exposed to. They have also opened doors and opportunities for us. Being able to go to an IACP conference – as a mid-level manager – was not something that I would have been able to do as a lieutenant.

NIJ.gov: Why does the LEADS Scholars program focus on mid-level managers in law enforcement?

Sheryl Victorian: The mid-level managers of today will be agency heads tomorrow. As we promote throughout the ranks, we are in a better position to effect change, and as mid-level managers we begin to recognize that and use our influence to do so. Even if our agencies traditionally are not accepting of evidence-based practices, as we advance through our organizations, I think our credibility becomes stronger, and we’ll be able to implement changes and have more influence. This program prepares us for opportunities for advancement as well.

And when you have somebody in mid-level management who understands the importance of evidence-based practices, and actually implements research, whether it’s regarding a strategy or a use of technology, I think it’s very helpful to agencies.

NIJ.gov: Why is evidence-based policing important?

Sheryl Victorian: Often in our profession, we’ve done things for one of three reasons: One, because something always worked; two, because traditionally it’s how we always did things; or three, because it is what someone told us to do. Adopting evidence-based practices can help us understand what actually works, what doesn’t work, and what would work with a few improvements. Strategies that work in one area of town may not work in another area of town. When we put the “why” behind it, it allows us the opportunity to understand why it’s effective or not effective, systematically.

NIJ.gov: How would you characterize your relationships with your fellow LEADS Scholars?

Sheryl Victorian: I think there has to be a certain level of transparency if you’re involved in this program — if you really want to get the truth about whatever your issue is. During our time together over the past several years, that’s what we found out about each other. We all want the truth, and we’re very honest in giving our opinions about what we’ve experienced and what we expect.

You start out to try affecting policy, but you develop these friendships and working relationships with the National Institute of Justice and other colleagues from law enforcement agencies across the country, and ultimately find that the relationships you’ve built are invaluable.

NIJ.gov: Do you have any thoughts on how to close the gap between police culture and academic research culture?

Sheryl Victorian: We now have a more educated police force and, as we begin to earn these degrees and conduct our own research and apply it in policing to affect policy — and the administrators who were traditional thinkers begin to see the value in that — we can start to make some changes.

I think it’s going to be important that we build trust with local universities and our community stakeholders and encourage research. Even if it’s something as simple as surveys of satisfaction in our communities or employee satisfaction, that’s a start. Those relationships would need to be built and nurtured by law enforcement leaders and our academic partners. But I think the key is to demonstrate the intrinsic and extrinsic value to the organization and the field of policing.

[note 1] Assistant Chief Victorian’s answers in the Q&A section have been edited for length.