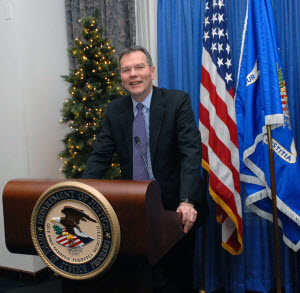 As I write my final message for NIJ's Director Corner, I'm filled with a full sweep of emotions. I'm excited to resume my teaching of bright, enthusiastic students at the University of Maryland — but I'm already starting to feel how much I will miss working with the bright, enthusiastic public servants at NIJ. Together, we have accomplished a great deal toward meeting my goal of establishing NIJ as the nation's leader in scientific research on crime and justice. For me, this means not only that our research continue to be rigorous and scientifically sound, but it also must be useful to criminal justice practitioners, especially at the local and state levels. I believe that we have made tremendous progress toward an even greater realization of NIJ's unique mission as a science agency.

I am personally gratified that my idea of "translational criminology" has resonated so powerfully among the staff and our stakeholders across the nation. Since I was nominated by President Obama and then took the reins at NIJ in July 2010, I have been guided by that simple, yet powerful idea. We have made significant progress in building the two-way street of translational criminology, where researchers and practitioners work hand-in-hand to prevent and reduce crime and translate scientific discoveries into policy and practice.

Serving as NIJ Director has been one of the high points of my career. Not only has my tenure been personally gratifying, but I believe that it has offered a significant step for the field of criminology and criminal justice. Never before in the history of NIJ has the position of director been filled by someone with a Ph.D. in criminology or criminal justice with extensive research experience. I believe that this also offered a turning point for the field and represents a clear indication that science is — and will be — an important part of the mission of NIJ, the Office of Justice Programs and the Department of Justice.

I am confident that the progress we have made together will continue in the future. Indeed, NIJ is on an irreversible trajectory and the future will only be brighter and better. In that regard, I'm happy to announce that Deputy Director Greg Ridgeway, Ph.D., will serve as acting director of the agency. I have every confidence that Dr. Ridgeway will continue to strengthen the science mission at NIJ and ensure that our research is relevant to the field. His extensive knowledge of the issues we face and his rapport with the field, especially with policymakers, will serve the agency well.

It has truly been an honor to serve my country under the leadership of President Barack Obama and Attorney General Eric Holder. I leave this position buoyed by the knowledge that my life course trajectory will continue to intersect with the paths of so many talented and dedicated people who serve in the interest of justice across the country.