Director’s Message: Proactive Policing — What We Know and What We Don’t Know, Yet

There essentially are two ways to police: reactive and proactive. Reactive policing is epitomized by officers responding to calls-for-service. Proactive policing is getting out in front of events in the hopes of preventing crimes and working with the community to reduce crimes.

Proactive policing strategies hold great promise to prevent and reduce crime and potentially improve relations between officers and the communities they serve. However, some may argue that proactive policing has the potential to distance the police from the community through concerns over their legality and possible bias against certain populations and geographic areas. 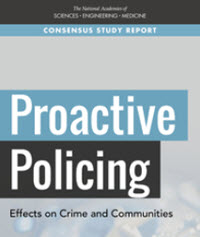 Read the complete report, available from the National Academy of Sciences Press.

There are a number of proactive policing approaches that can be boiled down to four approaches — place-based, problem-solving, person-based, and community-based. (Read a short description of each.) While it is useful to define these four approaches, it is important to remember that they are not mutually exclusive, and agencies may combine aspects of more than one in their actual operations.

The promise of proactive policing strategies makes it critical that we understand their effectiveness through rigorous and replicable research. A recent report published by the National of Academy of Sciences (NAS), based on research partially funded by NIJ, presents a survey of what we know about the various proactive policing strategies. Researchers looked at impact on crime, the law and legality of select practices, potential racial bias and disparities, and community reactions.

While the NAS researchers found evidence suggesting a number of these strategies can be successful in reducing crime, the crime prevention impacts are localized — restricted to a specific place, individuals, or groups of individuals. Little is known about the benefits at the larger jurisdiction level or across populations. There also is little known about the longer term impacts of these strategies.

Effective crime reduction strategies discussed, in terms of their impacts on crime, include hot-spots policing, problem-oriented policing, and focused deterrence. The NAS researchers found a common thread among effective strategies is an effort to tightly specify and focus on police activities over generalized, aggressive enforcement tactics.

Further, the NAS researchers concluded there is insufficient empirical evidence to support any conclusion about whether proactive policing increase or reduce constitutional violations. Additionally, the NAS researchers could not conclude, based on rigorous scientific evidence, that person-focused or place-based strategies increased the likelihood of police officers to engage in racially-biased behaviors.

When implementing any strategy, it’s important to keep in mind:

While it is important to communicate what we know based on solid research, we at NIJ are always interested in what we don't know, yet.

The NAS researchers indicate that more research is needed for a number of strategies. For example, the NAS researchers concluded that there was insufficient evidence that procedural justice policing causally impacts perceived police legitimacy or citizen cooperation with the police. Some of those strategies — predictive policing, procedural justice policing, community reactions to policing strategies, third-party policing — are addressed in our five-year strategic plan for our policing research portfolio. In this plan, we focus on supporting research that will advance policing practices, including police operations, police performance, police decision-making, effectiveness and efficiency of police operations, organizational leadership, and policing strategies.

Although the NAS researchers conclude that focused deterrence strategies are effective, these evaluations have been based on quasi-experiments, rather than randomized controlled trials (RCTs). Can the results of these quasi-experiments be replicated using RCTs? To answer this question, NIJ encourages the practitioner-researcher community to develop RCTs to assess the effectiveness of focused deterrence policing. Admittedly, performing these RCTs will be no simple task because the intervention and control communities or neighborhoods will have to be carefully matched before random assignment. Nevertheless, more rigorous evidence is needed to classify focused deterrence as an evidence-based strategy.

Under the strategic plan we also are committed to understanding how police agencies can enhance police-community relationships. Police organizations need to understand the entire range of potential impacts of their strategies and recognize that each community may have unique needs and expectations for police services.