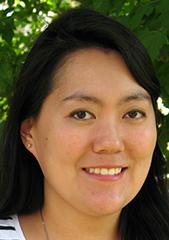 Christy Mancuso (2014 Fellow) is a Ph.D. candidate in the Department of Biology at the University of Utah, Salt Lake City. Before beginning her doctoral program, Christy earned an M.S. in biomedical forensic sciences from the Boston University School of Medicine. Christy's doctoral research focuses on the use of stable isotope analyses to reconstruct individuals' region of origin and travel history, to aid investigators as they trace the movement of, for example, illegal immigrants and victims of human trafficking. Receiving the GRF-STEM award from the National Institute of Justice has allowed me to take my doctoral research in a new direction. The award has given me the opportunity to ask questions related to human movement and identification and the financial ability to investigate those questions, says Christy.