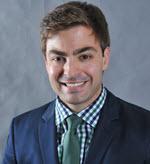 Dr. Kevin H. Wozniak is an assistant professor in the Department of Sociology at the University of Massachusetts Boston. He earned his B.A. in psychology and government from Skidmore College and his M.S. and Ph.D. in justice, law, and society from American University. He studies the political forces that shape criminal justice policy and practice in the U.S. Much of his work has focused on public opinion about crime and justice. He will use the W.E.B. Du Bois Fellowship to study public opinion about justice reinvestment with a particular focus on the way in which racialized cue words may polarize support and opposition for policy reform between whites and blacks. His work has been published in The Journal of Criminal Justice; Studies in Law, Politics, & Society; Criminal Justice Review; Criminal Justice Policy Review, and the Journal of Crime and Justice. He is co-author (with Dr. Joanne Savage) of The Differential Etiology of Violence, which is forthcoming from Oxford University Press. He was a 2012-2013 Congressional Fellow of the American Political Science Association. During his fellowship, he worked as a legislative aid for Rep. Robert C. "Bobby" Scott of Virginia and focused on juvenile justice, gun violence and gun control, and elementary and secondary education policy.